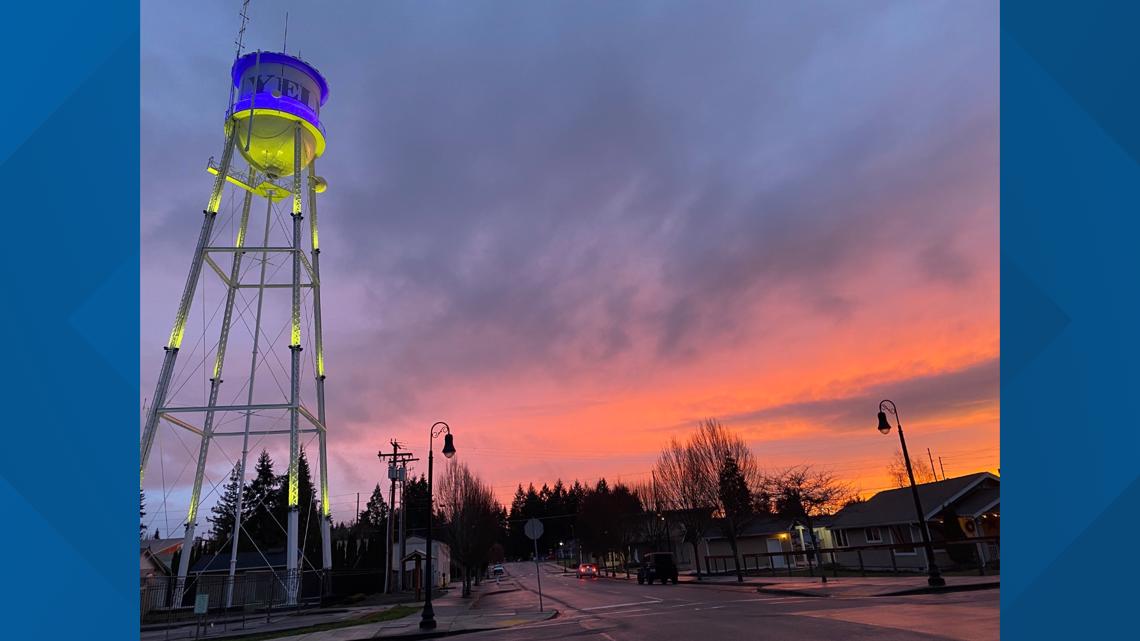 YELM, Wash. “What once served to supply the town of Yelm with water now serves a different purpose.

“It really is a shining beacon now for us,” Yelm Mayor Joe DePinto said.

The historic water tower, located next to Yelm’s town hall and designated in 2017 as a historical monument, is now lit up in blue and yellow, the colors of the Ukrainian flag.

DePinto said people on social media suggested he be lit in those colors to show solidarity with the country.

The aging tower, built in 1946, was at one time considered for demolition, according to Steve Craig, who launched a restoration project to save the tower.

He didn’t like the way it looked, saying it was in bad shape and showed signs of corrosion.

“I thought to myself, you know, there’s historical significance here as well as potential for art,” Craig said.

He garnered community and city support to renovate the tower. Craig secured a $450,000 state grant to pay for the restoration and install a lighting system.

Part of Craig’s inspiration came from Seattle’s Space Needle, which can also light up in different colors for various occasions.

“It could be Yelm’s Space Needle, without the restaurant,” Craig said.

Newly installed lights on the tower can illuminate the structure in any color of choice. Currently, the color of choice is blue and yellow to reflect solidarity with Ukraine.

“I think we’re seeing a world that’s united against this unjust war…iconic structures around the world can carry that message. Visually, I think it’s a wonderful thing,” Craig said.

DePinto said the tower will remain lit blue and yellow as long as the conflict in Ukraine persists.