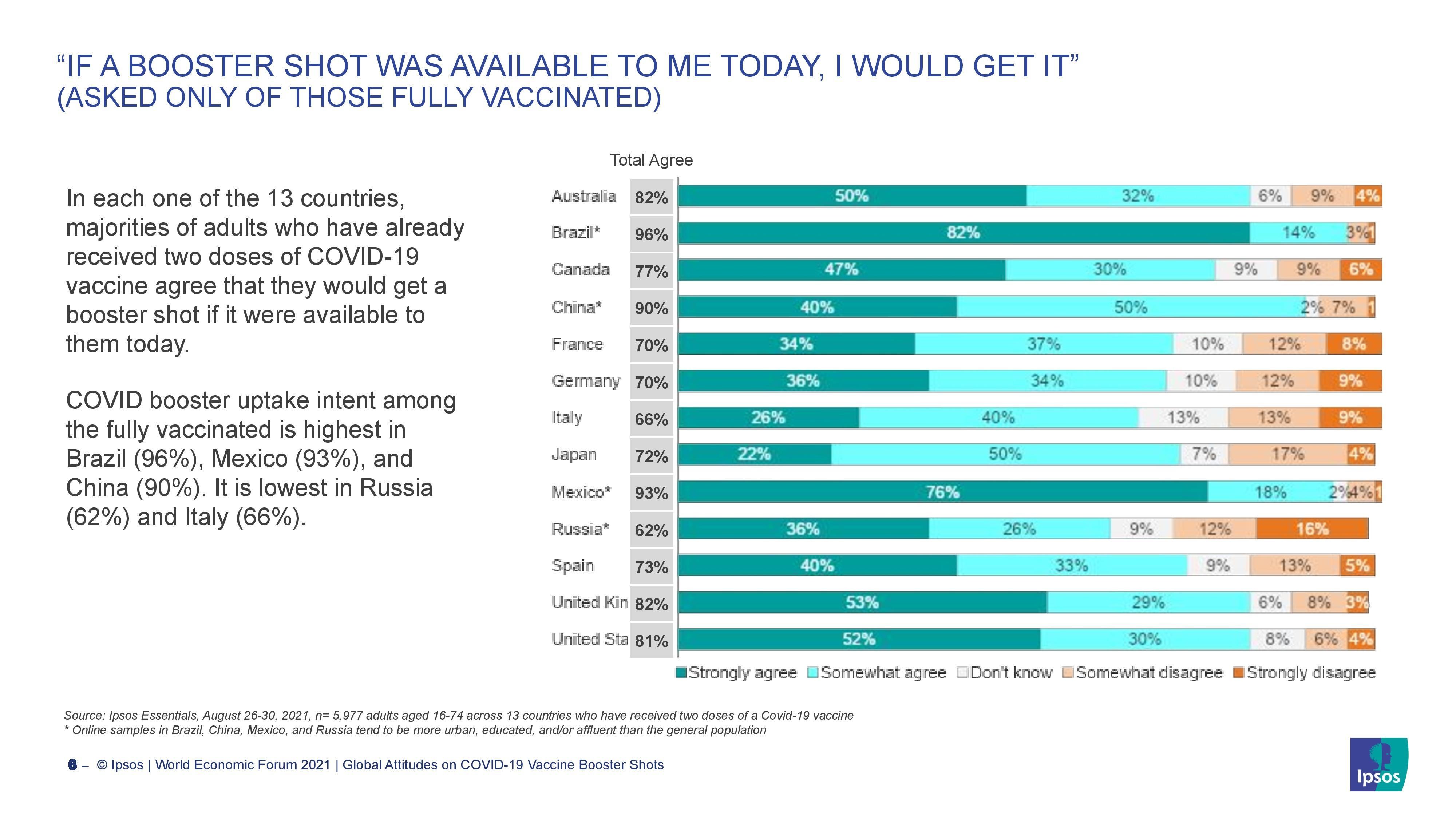 A new Ipsos survey in 13 countries around the world reveals that a majority of fully vaccinated adults would get a COVID-19 vaccine booster if offered to them.

However, a majority of adults in all countries also believe that priority should be given to people who have not yet received a first dose.

The survey, a collaboration with the World Economic Forum, was conducted at the end of August and involved 9,521 adults under the age of 75, of whom 5,977 had already received two doses of a COVID-19 vaccine.

Boosters will likely be needed, according to most people

The survey shows a widespread belief that booster shots of the COVID-19 vaccine will be needed at least once a year to maintain protection against the disease.

The expectation was highest in Mexico, Brazil and the UK, but lowest in Russia.

Each of our 50 last mile social enterprise and multi-stakeholder first responders works in four priority areas of need: prevention and protection; Treatment and relief of COVID-19; inclusive access to vaccines; and securing livelihoods. The list was curated jointly with regional hosts Catalyst 2030 NASE and Aavishkaar Group. Their profiles are available on www.wef.ch/lastmiletop50india.

And most fully vaccinated adults would get one.

The survey also showed that a majority of adults who have already received two doses of the COVID-19 vaccine would get a booster if offered.

But, priority should be given to those who have not yet had a jab

Despite the strong intention to get booster shots, a majority in all of the countries studied agree that the priority should be to get the first doses to those who need them before making booster shots available.

Support for prioritizing first doses is highest in China (83%) and lowest in France (56%). No more than a quarter disagreed in any one country, and in some countries as few as one in ten did.

What are COVID-19 vaccine recalls?

“The simplest answer is that this is just another dose of a vaccine that you received,” said infectious disease specialist Dr Albert Shaw. Yale Medicine in August. “The concept is to extend protective immunity, especially if there is evidence that protection wanes after a period of time.”

Boosters are used to counteract the drop in efficiency over time. For example, data for July shows that the Pfizer / BioNTech’s COVID-19 vaccine efficacy dropped to 84% after six months after peaking at 96% with two months of vaccination.

Booster doses can also be modified to target specific variants of a virus. “Current vaccines are still effective against the variants we are seeing today, especially to protect against serious illnesses that would require hospitalization or result in death. But if the virus evolves further and there is a worse variant, the vaccine could be changed, ”Dr Shaw said.

Has anyone started using them?

Some countries have already started rolling out third doses, including Israel, France and Germany. Others, including the UK and we, plan to do the same in September.

The World Health Organization had previously called for a pause on COVID-19 vaccine booster shots until the end of September. Chief Executive Officer Dr Adhanom Ghebreyesus on Wednesday called for this to be extended at least until the end of the year to narrow the immunization gap between countries.

And, as Genya Dana, Acting Head, Health and Healthcare at the World Economic Forum, explains, it’s critical that we work to close the gap between those who have access to vaccines and those who don’t. :

“COVID-19 has highlighted how vaccination is by far the most effective public health intervention to protect populations against disease and it is crucial that a robust vaccination infrastructure be deployed in every country in the world. Dana said.

“At least 60% of the world’s population must be vaccinated by 2022 to bring the current pandemic under control – but the issue of equity and access must be at the center of this effort. With only 0.4% of current doses administered in low-income countries, this crisis will continue to multiply. We must redouble our efforts to get everyone who has not yet had one vaccinated.

The views expressed in this article are those of the author alone and not of the World Economic Forum.