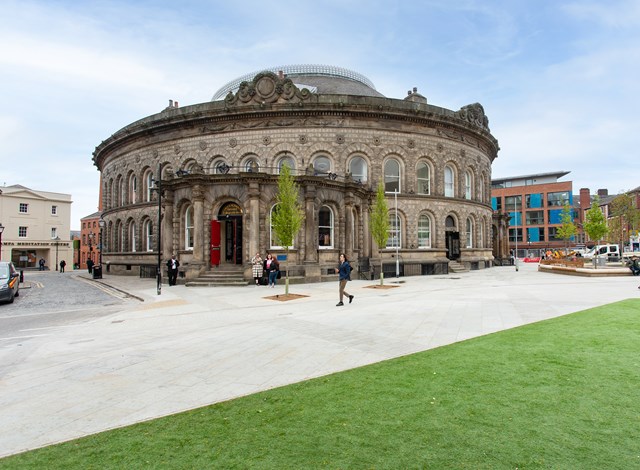 A stylish new look for one of Leeds city center’s most famous locations will be officially unveiled at a fun celebratory event taking place this weekend.

The area around Leeds Corn Exchange has been transformed by both a public realm scheme and a major package of Leeds Connecting Motorway improvements, the latter being part of the Leeds Public Transport Investment Scheme ( LPTIP) of £173.5 million.

Leeds City Council and partners have spent the last year creating a world-class pedestrianized open space in front of the Corn Exchange, acting as the perfect complement to the Grade I listed landmark. The building’s owner, Rushbond plc, has played a key role in this public domain project, both as design partner and co-founder.

Work on the LPTIP motorways has seen the provision of new infrastructure suitable for buses, bicycles and pedestrians in the area around the Corn Exchange and in the wider city centre, helping to implement continues the board’s Our Spaces strategy.

The two projects – which, along with other public realm initiatives at Meadow Lane, Cookridge Street and Greek Street, underline the council’s commitment to giving Leeds a greener, better connected and more inclusive city center – are now on about to be completed.

And this Saturday, May 14, this double stage will be marked in style by a free day of entertainment and activities for the whole family at the Corn Exchange, built in the 19th century and today a major shopping destination.

“The Corn Exchange is one of the jewels in Leeds’ crown and we are delighted that it now has the high quality setting it deserves.

“We are very grateful for the support and patience shown by residents and businesses, including the City’s bus operators, as the work took shape.

“Saturday’s celebration event will be a great way to showcase the changes that have been made. It promises to be a truly memorable day.

Almost 1,750 square meters of public realm has been created outside the Corn Exchange by improving two existing pedestrian areas and removing the stretch of Call Lane that runs between New Market Street and Crown Street.

New seating, trees and sandstone paving are among the design features that contribute to the welcoming nature of an accessible space that can be enjoyed daily by shoppers, workers, local residents and visitors.

An integrated cycle path runs east to west alongside this plaza-style area, which will also serve as an ideal venue for the type of pop-up events and gatherings that add to the vibrancy of life in Leeds.

“It is thanks to the collective vision of everyone involved in this program that Leeds Corn Exchange now has a world-class public space befitting this unique gem of a building and a much-loved icon of Leeds.

“Inspired by Cuthbert Brodrick’s marvelous architecture with its striking roof structure, this milestone will allow the building to once again play a central role in the city, linking the beautiful, bustling interior of the Corn Exchange with an elegant outdoor space.

“With the scenery set, we now have the opportunity to allow the magic that takes place inside the Corn Exchange to spill over outside. Together with the independent businesses that make the Corn Exchange experience Exchange so different, the new public space will host all kinds of events and activities for all to enjoy.

Funding for the public realm scheme was provided by the council, Rushbond and the West Yorkshire Combined Authority, the latter’s share coming from the government’s Getting Building Fund. Work on site was carried out by contractor John Sisk & Son Ltd.

“Sisk is incredibly proud to be the contractor who delivered this impressive Corn Exchange regeneration. Most of the people we employ on this project came from the Leeds area and feel privileged to be part of this transformation. We hope this area will be enjoyed by many future generations.

Improvements to the motorways around the Corn Exchange were led by the council’s Connecting Leeds team and focused on prioritizing buses, pedestrians and cyclists while aiming to reduce congestion in the city centre.

“Improving cycling, walking and public transport is a key part of my commitment to tackling the climate emergency. I am delighted that the Combined Authority can play its part, not only in this project but in others around our towns and city centres, to create more green space and space for active travel.

“The Corn Exchange is a historic building in Leeds, so it’s fantastic to see these changes, which will make the area more welcoming to people visiting, working or living in Leeds.”

The Corn Exchange Gateway works – and other initiatives such as the construction of Aire Park and the general traffic-free redesign of City Square – will support the council’s net zero ambitions and its vision of Leeds as a place where people don’t don’t need a car bypass.

The transformation of the Corn Exchange area also complements and connects to regeneration efforts in the nearby town of Kirkgate. Projects here include Rushbond’s recently completed restoration of the historic First White Cloth Hall building and the conservation and reuse of other properties as part of the Lower Kirkgate Townscape Heritage Initiative.

Work at Meadow Lane, meanwhile, saw the narrowing of the motorway, the removal of the former Hunslet Lane surface car park and the creation of new green space as part of the flagship Aire Park project. Revamped pedestrian spaces have also been created on Cookridge Street and Greek Street, helping to make the city center an even more attractive place to visit and live.

This Saturday’s celebration event at the Corn Exchange will run from 11 a.m. to 4 p.m. and will feature everything from food stalls and live music performances to dance sessions and kids’ crafts. Funding for the event came from the board and Rushbond, with additional organizational support from Sisk.

On August 4, 2020, the government confirmed the list of over 300 successful projects that will receive a £900m share of the Getting Building Fund.

The full list of projects is available on GOV.UK.

The Getting Building Fund invests in shovel-ready infrastructure projects to create jobs and support economic recovery across the country. Funded projects include:

All projects were selected by local business partnerships and combined municipal authorities in each region and approved by the Housing Secretary.