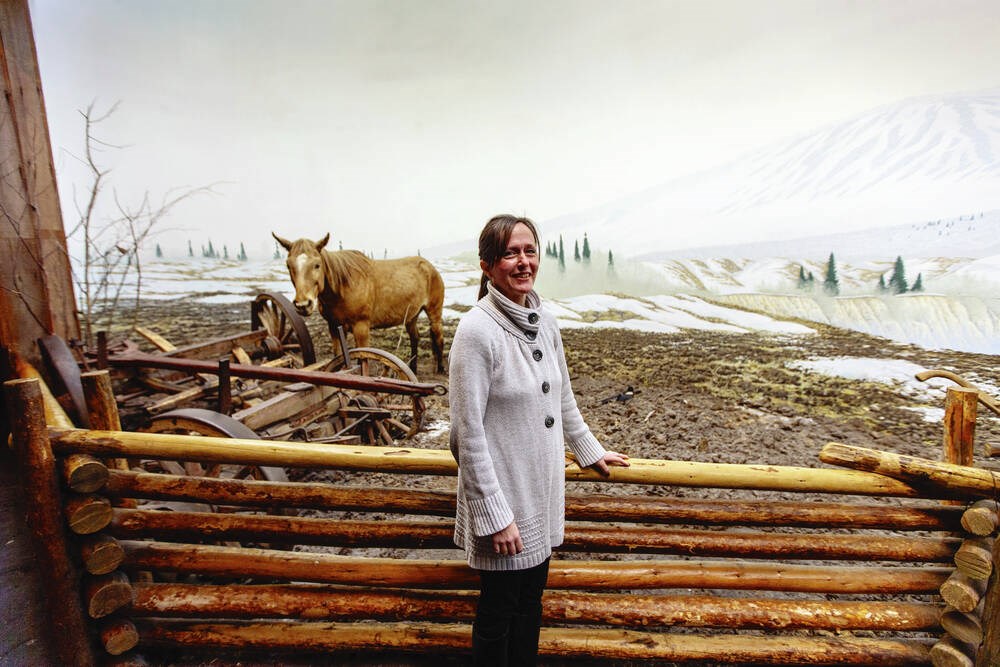 RBCM will close its third floor on December 31 for a makeover that is expected to take years. Many who visited the museum last week agreed that the exhibits should be presented in an updated context, but disagreed with their dismantling during the long viewing period.

In the Old Town exhibit at the Royal BC Museum, a little girl gazes into the pioneer kitchen, staring wide-eyed at pies in a one-ton iron skillet from the 1800s.

She turns to her mother and asks her, “Where’s the microwave?” “

It’s a great time to learn – and one that will soon be lost as the museum begins to redesign the way it presents the province’s early pioneers.

The museum will close the entire third floor, which also includes the First Peoples Gallery, on December 31, in what it calls a “decolonization” of exhibits in a step towards eliminating racism and starting reconciliation with peoples. indigenous.

Exhibits at the Becoming BC Gallery, tracing the history of early European settlers – including the Old Town replica, exhibits on the logging, fishing and mining industries, and Captain George’s Discovery ship Vancouver – will disappear after more than 50 years.

Elements of these exhibits could eventually return in a new form as the museum develops a ‘new narrative’.

The shutdown could last up to five years, as the museum carries out extensive consultations with under-represented groups who have contributed to the province, such as those of Chinese, South Asian and African descent, as well as the Jewish community. .

Many who visited the museum last week agreed that the exhibits should be presented in an updated context, but disagreed with their dismantling during the long viewing period.

Tim Brown played with his two sons, ages two and four, on the gold rush waterwheel. The boys searched for gold glitter, digging their hands in the water and sand in the hope of finding treasure.

Brown, 39, remembers doing the same thing when his father brought him to the museum at around the same age.

â€œI can see why they want to incorporate a better perspective, but it’s part of the story and it will be a shame to lose it,â€ said Brown, who compared the Old Town and other parts of the Becoming BC Gallery to an educational playground. .

â€œWhat I’ve always loved about it – and my kids now too – isn’t the museum about screens or what’s in glass boxes,â€ Brown said. “There are screens where you can really see and smell and touch.”

Many visitors admired all those special touches one last time – splashes of resin in the form of fish slime, and rusty knives and cleavers in the fish canning display; the smell of creosote around the Discovery docks; the cobblestones in wooden blocks in the streets of the old town; the subtle sound of the chickens on the first farm and the hammer on the anvil in the forge; and Charlie Chaplin’s films at the Majestic Theater.

Several visitors, including Lisa, spent a lot of time in the station, listening to the clicking of the telegraph machine and the lights and sounds of a roaring train near the station in front of translucent windows.

â€œI lived in a small community in the North of the Interior which for a long time was served only by train,â€ she said. â€œSo it’s always been sentimental for me to sit here for a while. “

Lisa, who did not want her last name used, said the taking of land from First Nations and the cascading effects of residential schools over several generations had devastating effects on First Nations, and this heartbreaking legacy continues. .

â€œI think we should talk about it, recognize it, make amendsâ€¦ but without denigrating other parts of the history of the province,â€ she said.

She “absolutely” agrees that better context is needed in many displays.

Mia Barkasy, 51, has been visiting the museum since the age of nine. She recalls school trips where her classmates dared each other to jump over a rail and jump into the bed inside Captain Vancouver’s ship.

Barkasy and his sister went there about 10 times a year and always had lunch at the station by the pot-bellied stove and watched the trains go by. She has had seasonal passes for decades and brought her children, now 25, 19 and 14, to visit the Old Town one last time.

â€œIt breaks my heart,â€ she said. â€œI get what they want to do, but I don’t get it either.

“I mean, the old town is part of our history, isn’t it?” Why do they want to get rid of it?

Barkasy agrees that changes are needed to add perspective, but says everything to unfold is “disappointing.”

Marie-France Germain, 69, remembers the opening of the third floor exhibitions in 1972 and took her son and daughter to visit the old town and the First Peoples Gallery almost every year since.

â€œThey loved all the First Nations masksâ€¦ there were stuffed animals here too for a while,â€ she said. â€œIt’s a great place to teach your kids. I just don’t know why they have to shut everything down.

Son Jesse Hickman, 42, admiring the Peace River Farm exhibit, said it was important to experience history in a museum setting “although there may be inaccuracies “or exclusions.

â€œIt at least gives you an idea of â€‹â€‹what life was like, and I think knowing our past is something we need,â€ Hickman said.

The Victoria Historical Society said it supports the museum’s goal of decolonizing its third-floor galleries and making the museum a space accessible to all, especially the goal of creating new narratives that showcase resilience and cultural properties of indigenous peoples.

“We are, however, concerned about the museum’s plan to close these galleries before embarking on a multi-step process of consulting, designing and creating new exhibits,” wrote John Lutz, spokesperson for the company, in an open letter published in the Times Colonist. . â€œClosure of the human history sectionâ€¦. will create an unnecessary chasm in the education and tourism worlds of British Columbia.

About half of the museum’s exhibition space will be closed, but the IMAX Theater and the Natural History Floor will remain open. Entrance fees to the museum are reduced by $ 8 for different age groups, starting January 1.

Paul Nursey of Destination Victoria said he reserved his comments on the potential impact on visitors to the area, saying it was a “sensitive” topic related to reconciliation.

â€¢ The museum was founded in 1886 in response to a petition signed by 30 prominent citizens. He was housed in a single room adjoining the office of the provincial secretary in the Capitol buildings, nicknamed the Birdcages. John Fannin, an avid outdoorsman and gifted collector and taxidermist, was appointed his first curator.

â€¢ The provincial government has been collecting archival documents since 1894, held by the Legislative Library. In 1908, the Provincial Archives was established as a separate institution, mandated to collect records of provincial importance.

â€¢ Over the next 12 years, the museum was moved twice, first to the old Supreme Court building and then in 1898 to the east wing of the newly constructed Legislative Buildings. During these years, 3,700 people recorded their visits to the museum each year (actual attendance was probably two to three times higher).

â€¢ Over the next 30 years, the museum grew. A new space was created for ethnological artifacts when the basement of the east wing was available in 1921; William Newcombe, son of CF Newcombe, and Dr Ian McTaggart Cowan joined the museum as assistant curators of biology; research articles have been published; and visitors arrived from across Canada and across the United States, including US President Theodore Roosevelt.

â€¢ In 1941, six vacant lots at the corner of Belleville and Douglas streets in Victoria were transformed into Thunderbird Park, where totem poles from the museum’s collection were displayed. Ten years later, pole deterioration had become a serious problem, and anthropology curator Wilson Duff launched a pole restoration program. The totem poles currently on display in Thunderbird Park are replicas of the originals, which have been moved inside, where they can be properly kept.

â€¢ In 1963, Prime Minister WAC Bennett announced his intention to build a new museum and archives as part of the Canadian Centennial Project.

â€¢ In 1966, Queen Elizabeth, the Queen Mother, consecrated the cornerstone of the current museum exhibits building.

â€¢ In 1969, the museum’s second building, the Fannin Tower, was completed and museum staff and collections officially moved into the new facilities.

â€¢ The museum celebrated its centenary in 1986 and participated in the second phase of its natural history galleries, Open Oceans.

â€¢ In 2003, with the proclamation of a new Museums Act, the Archives of British Columbia, the Helmcken House, the Netherlands Carillon, Thunderbird Park, St. Ann’s School and the Royal BC. The museum came together as the Royal BC Museum Corporation, creating a cultural district.

â€¢ In the fall of 2021, the province and the museum board announced the closure of the third floor on December 31 as the museum undergoes a â€œdecolonizationâ€ of exhibits. The museum begins consultations with â€œall voicesâ€ in the province to reorganize and redesign the space now occupied by the Becoming BC and First Peoples exhibitions.

â€¢ No timetable on decolonization of Royal BC Museum, according to interim CEO

To comment on this article, send a letter to the editor: [email protected]