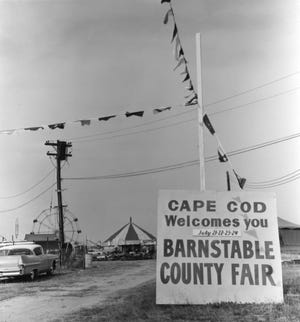 The Early Files includes stories from the archives of the Barnstable Patriot.

The scarcity of silver coinage becomes a source of great inconvenience even to the citizens of Cape Town. Until within a week or two there were many circulating in this section, and its sudden disappearance can only be explained by the fact that the bonuses offered by Boston brokers turned out to be too important to the greed of those who had the chance. to seize it.

The Island Home: This steamer has halted its trips to Hyannis for now at least if not completely. The Nantucket trip, one way or another, has brought considerable sums into the place, and our carriage drivers, together with hoteliers and saloon keepers, will miss much of the income they have hitherto now drawn from this source.

Barnstable was besieged last week by army worms. The first appearance was noticed in the meadow of David Bursley, Esq., where there were millions. They are also reported in many other places in the city and cause great damage in certain sections. Their last visit dates back to 1861.

Marstons Mills: The ice cream sale for the library was a success. Posters are out for a meeting at Hattie E. Mecarta next week to see library issues. … The sale of ice cream for the benefit of the church last Thursday brought in a nice sum.

Hyannis: Next Friday evening and Saturday will be the Hyannis Normal School 25th Anniversary Celebration and additional activities can be expected at the school and in the village. On Friday evening, the banquet will be held at the Ferguson. In case of good weather, Saturday afternoon exercises will take place on campus. Governor Cox is at the top of the list of speakers. (Note: Channing H. Cox served as Governor of Massachusetts from 1921 to 1925. The Ferguson was a hotel in Hyannis.)

After:The Barnstable councilor is a longtime advocate for housing, the environment

An Alabama Ford car was spotted Saturday afternoon parked near Hyannis Arms bearing a large “Hoover” plaque on its radiator with a smaller one below that read “Repeal the 18th Amendment.” Since in the minds of some the two do not match, people doubted the feelings of the car owner. (Note: The 18th Amendment prohibited the manufacture and sale of “intoxicating” alcohol; it was repealed in 1933 with the ratification of the 21st Amendment. President Herbert Hoover, who served from 1929 to 1933, was a supporter of the ban and during his administration expanded its federal application, hence the feeling that the two plates on the Alabama car did not “jibe”. The Hyannis Arms was the old Ferguson Hotel.)

The culmination of a year-long effort by Barnstable residents, John G. Winant, U.S. Ambassador to the Court of St. James, and Mrs. Winant last week opened a nursery for children displaced by the bombs. Barnstaple, England. Partially funded by $9,000 raised in the Cape Town community, the nursery is known as the Broadgate Residential Nursery. This is the 14th residential nursery offered to British children with American money. … Mrs. Winant telegraphed her appreciation for the contributions that helped establish the nursery to Chester A. Crocker, chairman of the Barnstable Breeders and treasurer of the Barnstable Children’s Committee. (Note: Mayor Charles L. Dart of Barnstaple, England had previously visited Cape Cod and the town of Barnstable in 1939.)

Ten Clark University Summer School students will visit the Barnstable Dunes on Saturday as part of their Animal Ecology course. Under the guidance of their instructor, Dr. Rudolph F. Nunnemacher, associate professor of geology at Clark, students will study the encroachment of sand on the landmass and observe the animals and plants that adapt to the changing environment by compared to the rocky north coast they visited a week ago.

The other day, Mrs. John F. Kennedy and her daughter, Caroline, were enjoying a picnic on a private beach in Hyannis Port. A little girl walked away from her friends and stood aside, watching the progress of the diners. When Mrs. Kennedy offered her some grapes or a piece of cake, she shook her head and replied gravely; “No, thank you. My mother won’t let me take anything from strangers.”

City officials and local firefighters will cut the first slice of a 1,000 pound birthday cake to celebrate the one year anniversary of West End Marketplace, Sea and Main streets, Hyannis on Saturday July 24 at noon. Slices of cake, one of the biggest birthday cakes ever seen on Cape Cod, will be sold for 50 cents each, with proceeds going to the Hyannis Fire Department Rescue Fund. (Note: entertainment included a Dixieland band, magic show and clowns.)

The JFK Museum in Old City Hall on Main Street in Hyannis charting the former president’s cape life, which held its inauguration ceremony on Monday, is already an unqualified success. To date, over 1,000 visitors have passed through the doors, donating between $125 and $150 per day. (Note: This text appeared as a caption under a Patriot front-page photo showing the inauguration event.)

The long-awaited switch from creaky conveyor belt to modern trash compactors at Marstons Mills residential transfer station is set to open on Tuesday. Many of the new directional signs are in place at the transfer station, but crews will take advantage of Monday’s half-day schedule to make other necessary trips. … As for the fate of the conveyor belt, which has moved countless tons of waste for more than 20 years, the whole thing will be dismantled and sold for scrap.