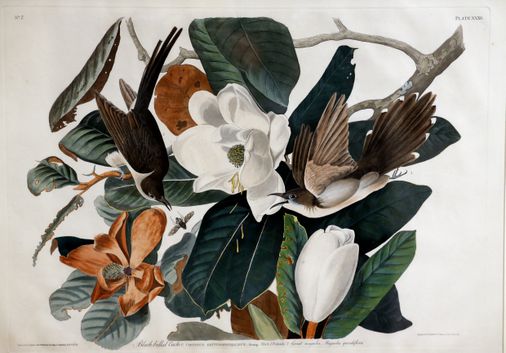 The Concord Museum exhibit is “Alive With Birds”

In 2019, 143 acres of the former October Farm were transferred to Mass Audubon, a nonprofit organization that protects wildlife in Massachusetts that Brewster led as its first president. It was renamed Brewster’s Woods Wildlife Sanctuary.

Once the Concord Museum learned of the donation, plans began for an exhibit that would educate the public about the heritage of the land and its original custodian.

“Through the Concord Vine, we knew the property was being offered to Mass Audubon, and it seemed like the perfect opportunity for a joint exhibit,” said Erica Lome, senior curator of “Alive With Birds.” .

She said it was beneficial for the Concord Museum and Mass Audubon to collaborate on a common part of their stories.

The exhibit features 20 paintings and sculptures from Mass Audubon’s Museum of American Bird Art. The pieces cover many different styles and time periods.

“All of this art was done with different artistic goals and sensibilities, so they show the birds in different ways, and I think that’s perfect for what we’re trying to do here in terms of showcasing this incredible property to the audience,” Amy said. Montague, director of the Museum of American Bird Art.

Many of the works are accompanied by handwritten documents from Brewster’s diaries of the Chesterwood Archives at Williams College and The Museum of Comparative Zoology at Harvard University. Brewster’s direct quotes often describe the subjects of artwork.

“Early in the process it was a decision, let’s match the images to Brewster’s own words,” said Concord Museum curator David Wood. “It seems to work well; why not let Brewster write the labels for us?

Another element of the exhibit is a 10-minute video experience of Brewster’s Woods called “The Farm”.

The museum partnered with Richard Lewis Media Group to create a video element using some of the 2,000 Mass Audubon glass plate negatives that Brewster captured from October Farm during his 30 years there.

“We wanted to bridge the gap between Brewster’s Woods past and present,” Lome said. “It’s a great way for people to get to know this property and hopefully entice them to visit.”

The photographs were framed with video taken by filmographers on the property today. The resulting video display is displayed on the back wall of the exhibit along with an audio recording of bird calls on the property.

Beyond the artwork, signs throughout the exhibit explain how Brewster made October Farm one of the earliest examples of field study for birds.

“It’s a celebration of the use he made of October Farm,” which consisted of parcels totaling 300 acres that Brewster purchased along the Concord River, Woods said. “He acquired these farms and glued them together because you need a certain area to actually see the birds in their natural habitat.”

Early in his bird-studying career, Brewster would shoot them to study their characteristics. In 1890, after noticing the serious decline in the birds he saw on his outings, he had a “change of mind” and decided to reverse his approach.

“It was a time when Brewster said, ‘I’m not gonna shoot birds anymore,’ because that’s how you did it, you didn’t sight until you didn’t kill the specimen,” Wood said.

Beyond Brewster’s curatorial work, the exhibition explores different chapters of his life which the curators hope will inspire visitors.

The exhibit also explores the contributions of Robert Gilbert, a black ornithologist who was Brewster’s field assistant and companion for more than two decades, and Brewster’s lifelong friendship with sculptor Daniel Chester French.

“I think it speaks to different levels of interest the visitor might have,” Lomé said. “They may come just to see beautiful artwork, but hopefully they take away a lot of this interesting science history.”

“Alive With Birds” will remain open until September 5, and visitors are welcome to an array of programs found at concordmuseum.org. Brewster’s Woods has trails open to the public from dawn to dusk.

The relationship between the exhibit and the land is important, according to Montague, and it is hoped that a visit to either will leave the guest with a new appreciation for birds and conservation.

“I hope people will look at the art that has inspired people for nearly 200 years and that will connect people to the land we celebrate and inspire them to preserve it,” Montague said.

Grace Gilson can be reached at [email protected]