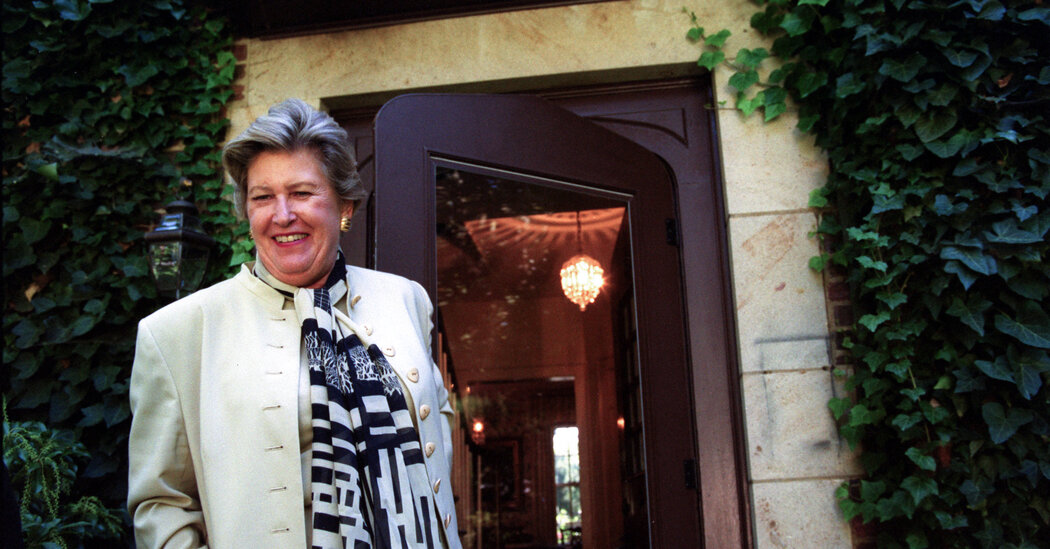 Phyllis Oakley, whose 25-year diplomatic career at the State Department nearly didn’t happen because of an unspoken rule barring female Foreign Service officers from marrying, died Jan. 22 at a Washington hospital. She was 87 years old.

His son, Thomas Oakley, confirmed the death. He said she was healthy but “her heart just stopped”.

In the late 1980s, as the Cold War waned, Mrs. Oakley, outspoken and forthright, whose loud laughter often signaled her presence, was well known to the public as Deputy Spokesperson (the term then in use ) for the State Department under President Ronald Reagan. She later became Assistant Secretary for Refugees and Assistant Secretary for Intelligence and Research under President Bill Clinton.

She had begun her career in 1957. But when she married in 1958, State Department custom dictated that she resign.

In the late 1960s and early 1970s, as women began to break down barriers in other professions, the handful of female foreign service officers challenged this and other antiquated notions that discriminated. The ministry gave in to the unofficial ban on marriage in 1971, allowing women to marry and offering to reinstate those who had been expelled earlier.

At that time, few of those who left wanted to return. But Mrs. Oakley did. She had spent the intervening years as the wife of Foreign Service Officer Robert B. Oakley, performing the myriad social, diplomatic, and managerial duties the department expected of wives under its “two-for-one” motto. price of one”. She also raised their two children.

Once reinstated, she and her husband became one of the Foreign Service’s first so-called tandem couples, camping and decamping all over the world — sometimes together, sometimes without.

Phyllis Elsa Elliott was born on November 23, 1934 in Omaha. His mother, Elsa (Kerkow) Elliott, taught high school math and chemistry. His father, Thomas M. Elliott, was a salesman for the Rawlings Sporting Goods Company; his promotions took the family to Columbus, Ohio and St. Louis.

Phyllis has always been interested in public affairs; she received job opportunity information from the State Department when she was 12 years old. During World War II, she followed the battles closely, fascinated by history and geography.

At Northwestern University, she majored in political science and earned her Phi Beta Kappa degree in 1956. She earned her master’s degree from Tufts University’s Fletcher School of Law and Diplomacy in 1957, then joined the foreign Service.

She was finishing her French training and awaiting her first overseas posting when she met Bob Oakley, another young officer in training. They decided to get married, knowing full well that her career would be over before it even started.

“We accepted this discrimination without batting an eyelid,” she said in a 2000 oral history for the Association for Diplomatic Studies and Training.

Mr Oakley was sent to Sudan in May 1958. The young couple married at a registry office in Cairo in June and then began life together in Khartoum.

His next posting was the Ivory Coast. Then he was sent to Vietnam, where families were not allowed to follow. Mrs. Oakley and the children spent this time in Shreveport, Louisiana, where her husband’s family lived, and she taught American history at Centenary College. She later attributed her desire to join the Foreign Service in part to the joy she found in teaching.

“It was nice to find out that I still had a brain that I could use,” she said in the oral history.

After Mr. Oakley left Vietnam in 1967, the family reunited and moved to Paris; then New York, where he worked at the United Nations; then Beirut, where they lived until 1974, when Ms. Oakley was reinstated in the Foreign Service, in Washington. His specialties included Arab-Israeli relations and the Panama Canal Treaty.

When her husband was first appointed ambassador to Zaire in 1979, Ms Oakley accompanied him, but as an employee of the United States Information Agency and not under his direct responsibility. It was the first time a woman had worked in her husband’s mission.

He then traveled to Somalia in 1982. Instead of joining him there, Ms. Oakley returned to Washington and took a mid-level position in the Afghan office. Secretary of State George P. Shultz spotted her talking about Afghanistan on “The MacNeil/Lehrer NewsHour” one night and was so impressed that when an opening presented itself, he appointed Deputy Ministry Spokesperson. She was the first woman to hold the position and became a widely recognizable figure delivering televised briefings.

She held the post from 1986 to 1989, when her husband was appointed Ambassador to Pakistan. They didn’t want to be apart anymore, so she took a job in Islamabad with the United States Agency for International Development, which ruffled a few feathers.

“I think everyone recognized that I might know more about Afghan politics than anyone else in the mission,” she said in the oral history, “but he there was the feeling that as the ambassador’s wife, I was imposed on them”.

After retiring from the State Department in 1999, she taught at the Johns Hopkins School of Advanced International Studies, Mount Holyoke College, and Northwestern.

In addition to her son, Ms. Oakley is survived by her daughter, Mary Kress, and five grandchildren. Her husband died in 2014.

At the end of her oral history, Ms Oakley reflected on what might have happened if she hadn’t been sidelined in the 1950s or married.

“I think I would have had a good career,” she said, “but I don’t think it would have been as rich and rewarding.”