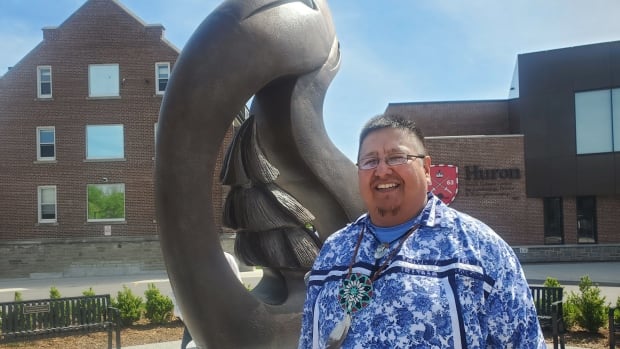 To symbolize reconciliation between his community and the Anglican Church, Indigenous artist Leroy Henry has designed an Eagle Tree of Peace statue, which will be a centerpiece of the Huron University campus in London, Ontario.

Henry, who is a Haudenosaunee artist from Six Nations of the Grand River near Brantford, Ontario, said the statue represents the “great law of peace”, which is a historic agreement that binds the six distinct First Nations to create harmony.

“What it symbolizes is that piece of great law. It’s very important, it governs who we are and what we should be, and how we should treat each other,” he said. -he declares.

For the Anglican-affiliated university, the statue serves as a constant reminder of its commitment to reconciliation for the church’s role in managing residential schools in southwestern Ontario and to honor Indigenous peoples of the country, they said during the unveiling of the statue on Thursday.

Henry said the statue has been a work in progress for his family for around 38 years. The original design was conceived by his now retired father, which Henry took over and completed.

“It’s a family legacy, we worked together to get here,” he said. “My dad was the boss when he was carving, so it’s kind of like I dragged my family name around with me and carried that lead to different heights.”

The five arrows in the middle represent the original five Grand River Nations, with the Tuscarora Nation as the most recent addition.

Together, they all form the largest First Nations community in Canada, made up of the Mohawk, Oneida, Seneca, Cayuga, Onondaga and Tuscarora Nations.

“A long walk to restore confidence”

Hoogterp grew up with a Catholic father and mother from the Bkejwanong Territory of Walpole Island First Nation in southwestern Ontario. He believes his role at the university can help foster a healthier relationship with Indigenous communities.

“I experienced both sides of colonialism and indigeneity,” he said. “I believe that when we recognize history, then we can bridge that gap for our Indigenous students living in rural communities.

Anyone walking past the campus can’t miss the large statue that symbolizes a step toward reconciliation, said Huron President Barry Craig.

“The past is something none of us can change, but we can recognize the things we’ve done wrong in the past and swear never to do it again and try to fix it, that’s how is reconciliation, it’s a long walk to build trust again with those we have hurt,” he said.

Craig said he wanted to fill the new academic building on campus with artwork from Indigenous designers. It was then that he was introduced to Henry, who not only designed the statue, but also taught Craig a lot about his rich culture.

“Each time I spoke to Leroy, he took me to another level of understanding his people and their culture. The connection to the earth, that depth below the surface that has existed for thousands of years” , he added.

Craig looks forward to the students’ return to campus in September and asks him about the statue so he can share his story with Henry’s councils and Native elders. He hopes that students’ curiosity will lead them to deepen their understanding of history.

Henry hopes that one day his future generations can step forward and create something even bigger and better than his statue, but until then he’s content to see his creation come to life.