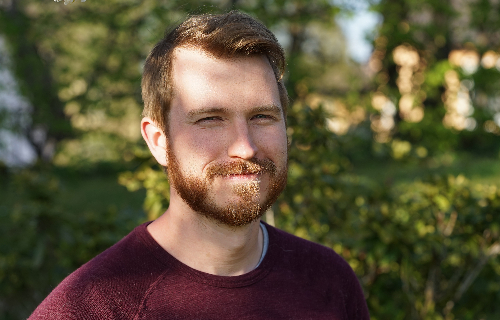 By Micheal J. Rico Last updated May 31, 2022
Share
What struck Sean Lawrence as he stood at the ruins of the ancient city of Göbekli Tepe in the Anatolia region of Turkey was not the ongoing archaeological work, but the fact that the shepherds and local farmers had very little say in how this site should be preserved.

This observation led him on a four-year quest to study how multinational institutions and corporations often act in disregard of the concerns of local populations in underdeveloped regions. Along the way, he not only learned German, French, Turkish and Ottoman Turkish; won a prestigious Fulbright Scholar Award; lived for a time in Turkey and Germany; and spent hours in windowless archives; but also completed his doctoral studies in history at UC Santa Cruz.

The cross-disciplinary conversations and experiences at UC Santa Cruz — including the courses he took in History of Consciousness, Women’s Studies, and Environmental Studies — were “a huge boon to my career and my research,” said Lawrence, 33, who had wanted to combine humanism with ecological study.

Soon he, his wife and two children will leave their home in Bad Reichenhall, Bavaria, Germany, for the United States, where Lawrence has been hired as an assistant professor at West Virginia University to teach 20th-century European history. century.

Lawrence’s Ph.D. work focused on the relationship between Germany’s Deutsche Bank and the Ottoman Empire, which ruled from the 13th century until the end of the First World War. In the late 1800s, the Ottoman government wanted to build a railway in the Anatolia region of Turkey but, according to Lawrence, it lacked the money. He managed to get a loan from Deutsche Bank, backing it with promises of income from taxes levied on things like fishing, salt and crops from farmers in the area, he said.

Villages were flooded, malaria flourished, wheat and barley became major crops, and the landscape was irrevocably altered “essentially convincing these groups that these [changes] were the keys to the wealth of untapped agricultural potential,” Lawrence said.

Residents had little or no say in how this type of bailout capitalism transformed their lives and lands.

“A lot of things that we consider unique to our modern capitalist world actually have much older roots,” Lawrence explained. “The relationship between Deutsche Bank and the Ottoman government was symbiotic. They grew stronger at the expense of ordinary people. … It is the same form of domination that multinational corporations apply to rural populations today.

Lawrence, meanwhile, already has a new research project in mind. Back in the United States, he will also teach and examine how changes caused by business development in an area of ​​Turkey have contributed to the rise of a serious tick-borne disease that can cause bleeding and even death. .