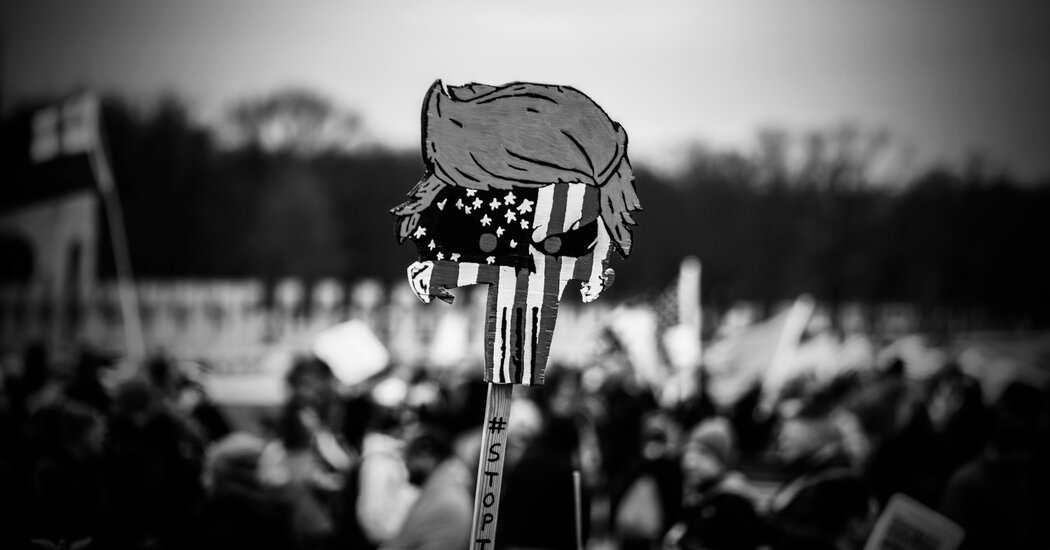 This article is part of a collection of the events of January 6, a year later. Read more in a note by Times Opinion political editor Ezekiel Kweku in our Opinion Today newsletter.

The year is 2086. At a dedication ceremony in the Statuary Hall of the United States Capitol, visitors listen to august speeches on a dark day long ago when patriots fought to defend democracy. . The crowd erupts into applause as the fabric covering the new statue falls. Marble megaphone in the air, headdress and gleaming horns, the shaman QAnon of January 6, 2021, takes his place among the heroes of American history.

If it seems exaggerated that a notorious insurgent could be given such a place of honor, the past is far from the same. When Confederate President Jefferson Davis was jailed after the Civil War (rumored to be wearing his own odd costume at the time of his arrest) he was more vilified and mocked than any rioter on Capitol Hill. , and its far more serious crimes. His statue joined that of George Washington on Capitol Hill 65 years later.

As curators of the National Museum of American History at the Smithsonian, we are regularly confronted with hard physical evidence of how slippery the past can be. Materials brought in by curators long ago take on unintended meanings. The objects we’ve collected, which almost seem to speak for themselves when we catalog them, might find an entirely different use behind glass decades from now.

It is scary, but not impossible, to imagine the signs screaming “Stop Theft!” Picked up from the trash-strewn National Mall on January 7, 2021, once treated like patriotic treasures, displayed next to the desk Thomas Jefferson used to draft the Declaration of Independence or the inkwell Abraham Lincoln dived into to compose the emancipation proclamation.

When the crowd broke into the halls of Congress for the first time, the bewilderment on their faces indicated that many hadn’t planned on breaking into the story. And yet, as our allies have struggled over the past year to minimize the onslaught, many of us have looked to the future, hoping for some clarification of our chaotic era. When everything is finally known, we say to ourselves, there will be no longer any doubt about the person responsible for this singular attack on the functioning of our democracy. Their names will live in infamy. History, we believe, will judge them harshly.

History, however, may have other plans. Unlike the mantra, it has neither a good nor a bad side. A generation after secession, the famous historian James Ford Rhodes declared that “the judgment of posterity is established: it was an unjust cause which the South defended by arms”, at the same time when statues of Confederate generals were placed on pedestals all over the country. nation. Rhodes was not wrong in his reading of Confederation, but in his faith in “the judgment of posterity.”

Judging, it turns out, is not the strong point of the story. Notions of justice change dramatically over time, and this is not the reason we collect, preserve or display artifacts from the past. For curators and historians, the evolving meaning of our objects is far more fascinating than what they call unfair. The Smithsonian’s collections contain, for example, pikes from the failed slave rebellion of John Brown in the South in 1859. At various times since then his pikes have symbolized a demented terrorist’s plan for the murder of mass, the fiery crusade of a religious fanatic and the loneliness of a hero fighting for justice.

President Andrew Jackson’s dueling pistols – once proof of the aggressive populism of a fighter honored at Democratic banquets and the names of generations of boys – could no longer be displayed without mentioning the ethnic cleansing of Native Americans for which he was is often beaten.

Moments that outwardly resemble January 6, involving both violent mobs and their powerful enablers, have proven particularly ripe for revision, following a familiar pattern of normalization and valuation. When gangs of anti-Catholic fanatics ransacked a Charlestown, Massachusetts convent before burning it down in 1834, it was one of the most explosive outbursts of rampant 19th-century nativism. Yet in the aftermath of the attack, no less a character than telegraph developer (and vocal opponent of immigration) Samuel Morse looked eerily like recent apologists defending so-called January 6 political prisoners. â€œI don’t know of anyone who justifies the unlawful violence,â€ he said, â€œbut I say without hesitation that the feeling of indignation that animated the population was a just and proper feeling.

Nothing in our past, as blatant as it may seem to us today, guarantees eternal condemnation. Even bloody undemocratic coups can find their monuments. In the aftermath of the 1872 Louisiana governor election, won by a multiracial Republican coalition of 56 to 43 percent, the losing white supremacist Democrats launched two uprisings, murdered police officers, waged war on federal troops in the United States. streets of New Orleans and even captured former Confederate General James Longstreet (then fighting the coup). An obelisk commemorating the second of these uprisings was erected in New Orleans 18 years after the firing stopped and did not fall until 2017.

Of course, our immediate future may shape the distant memory of January 6. The elections of 2022 and 2024 will help determine whether the big lie becomes the official truth. Already a significant segment of the population has embraced the fictions about the attack on the Capitol. In a national poll recently released by the University of Massachusetts, more than 30% of those polled said they did not accept the legitimacy of President Biden’s victory in 2020, and 25% objected to investigating those who sought to overturn the elections.

Our recent reckoning with American history has shown the indelible impact of stilted forms of institutional power, such as dedicating monuments, inscribing plaques, and holding hearings. Devoting rioters to the rank of heroes could be done quite discreetly. Those who live in a fake news bubble have shown their willingness to falsify history as well. After the Commission of 1776 and state-level bans on teaching America’s racist past, we should also be ready to see the January 6 laundering.

History also shows that an unknown policy in the distant future will color the memory of January 6. Like the rebels of the last days who adopted the Confederate flag as a fuzzy symbol of Southern heritage, white supremacy and general misanthropy, January 6 could be honored by people who share little more than desire. to offend. Or a national reconciliation, after the end of our era of division, could lead Americans on both sides of this story to absurdity, flaunting the riot shields side by side of far-right terrorists and counter-protesters. liberals in museums as moral equivalents.

And no matter who wins the historic wars of the future, the horrific attack on the Capitol is likely to one day annoy schoolchildren when asked about Bunker Hill, the Compromise of 1850, the Battle of the Bulge and January 6, whatever it is. Our trauma will be their duty.

There is no control over what the future will say about us. Generations keep flowing in, reassessing old heroes and asking new questions. Children present at the unveiling of the Capitoline Shaman statue in 2086 (should that or other mind-boggling commemorations happen) may grow up to challenge their parents’ accounts of January 6. Possibly the Smithsonian items of the time – the dusty suit of a congressman who helped clean up the Capitol after the attack, the badges worn by members of the National Guard who protected Washington in the aftermath. , the signs with religious and political slogans that the rioters have used to justify the violence – will help guide these young people to an evidence-based reading of the past.

We cannot know; we have no ownership over what is to come. The best we can do is carefully map our moment, to preserve road signs that will lead to a place we will never see.

As curators, as historians, as citizens, we are frequently reminded that the past is a foreign country. But the future too.