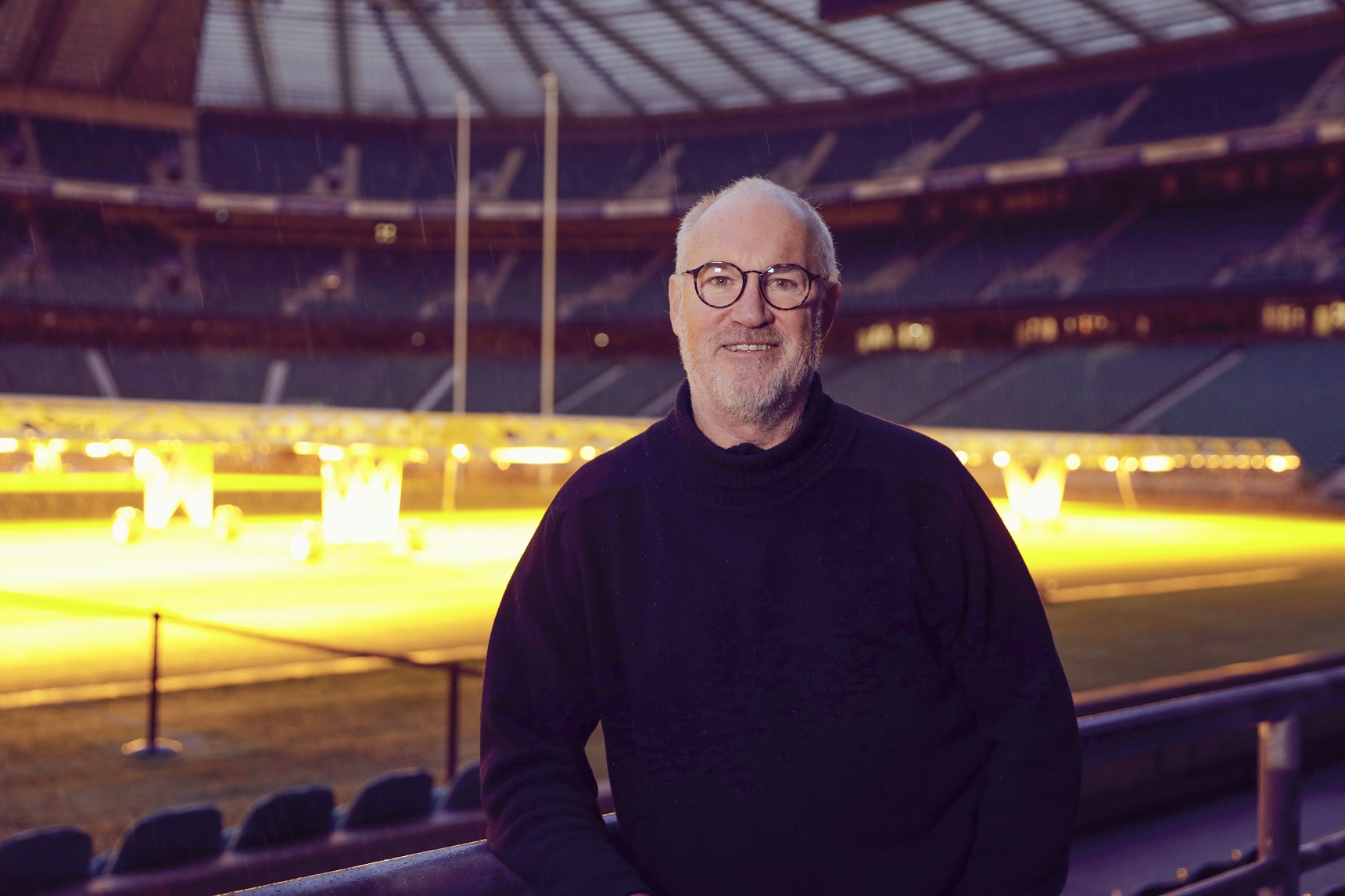 The entire Fitzwilliam community was shocked and saddened to learn last week of the sudden passing of Eddie Butler (MML, 1976), aged 65.

Eddie was a Fitzwilliam legend, cherished by his contemporaries and loved by current students. A full obituary will follow, but we wanted to share a selection of short tributes and memories from some of our members who knew him best.

“Eddie Butler came to Fitzwilliam at the start of my third year at college. Very quickly, he became my friend, my teammate in the university rugby team and my driver (he had arrived in his mother’s old Maxi, I believe…). He also sometimes lent me his bike, even though my feet barely touched the pedals, let alone the ground! We later became colleagues in journalism and had no trouble remembering, and sometimes replicating, the joys of life at Fitz, with the Light Blues, on the rugby tours… I will miss him

Here is a poem about his first night in Fitz:

Eddie was a Billy, an Onion and a Shrimp
Taken to college life at Fitz, as to the born mansion.
Studied French and Spanish, did more than get a pass
But when it came to social life, it was always a different class.

Lanky youngster from Pontypool, he looked worried
An oral in the morning, he said to himself that he had to prepare,
A beer the first night seemed harmless, top lemon to quench his thirst
Then back to the Spanish vocabulary, it would take one last puff.

But the older heads, no wiser, had seen the size of the young,
Cuppers’ dreams of glory took shape before their eyes.
How to best trap it for the team before the Freshers Fair
Could he tempt him with some fancy stuff, which they can’t compare to?

I know said one, we’re going to kill two birds, with irreproachable logic
He’s Struggling With His Spanish Words, But They’re Surely Teachable
With each sip, we will help him, shouting sentences in Spanish
He will succeed and during the night, his doubts will surely vanish.

The rest, they say, is history, and Eddie passed easily.
The College team had their man, it was really a piece of cake
In cricket too, he had the talent, no chance of being a blocker
And with the prawns, a natural fit, he shone at Cuppers football

Eddie was a Billy, an Onion and a Shrimp
Taken to college life at Fitz, as to the born mansion.
Studied French and Spanish, did more than get a pass
But when it came to social life, it was always a different class.”

“250 words? I’ll do my best. Eddie and I played two terms of rugby together: the first, for college, including a Varsity Match; the second, en route to a Cuppers final. We lost that. If he was there, he’d tell you it still hurts. 15 games. It would have been more if he hadn’t been kicked out in the second of them. I was at the bottom of a ruck, he was in the center of the carnage above me. What has been said about Eddie as a player, as a writer, as a commentator, as the voice of the edits, is absolutely true. He did all these things intelligently, wittily and in his own way, as he did everything.

For me, it’s not those things. It was the warmth of his ‘hello’ after no matter how long. He would stand at the edge of the group but would be its center. He would ask questions, listen to your answers and make you think. If you were brave enough for a debate, you would have one. A finger thrust, he held on. Best of all was his speeches. In the Fitz room for our sports dinners; at the Savoy with the Hawks Club; wherever the college rugby club asked him to be. No notes. I listened intently and got hooked. He would say things he had the words for and then talk in the bar with everyone and everyone.

As for the academic side of Eddie’s Cambridge career, Teacher Robert Lethbridge remembers teaching him French for the first part and remembers the recklessness with which Eddie dealt with his supervisor’s then “ferocious” teaching style! Many years later, when Robert was master, and introducing Eddie at a sports dinner, he took the opportunity to congratulate him on the impeccable accent with which he named the French players on the rugby pitch. In due time, and in return, Eddie sent her one of his novels, suitably ironically inscribed. What has remained true, through Eddie’s decades of brilliant BBC commentary, is the pride with which Robert pointed out to his children and grandchildren who watched television with him that he had “taught him to Fitzwilliam.

“He was a broadcasting legend and an inspiring colleague.

His rugby commentary was of course informed by his experience and excellence as a top player. As a former captain of his country and a British and Irish Lion, Eddie knew exactly what he was talking about. His words imbued with an insight and passion that few could match.

Just as iconic as his commentary, however, were his beautifully scripted, poetic voice-overs, reviewing everything from the Olympics to royal history. His mastery of the language perfectly captures the essence of many memorable events.

And yet, despite his impressive physical and professional stature, I always found him to be an approachable, friendly and smiling presence in the media box at the stadium in which I sometimes met him.

A gentle giant, a true gentleman, Eddie was a credit to Fitz and the BBC. A man who commanded the respect and affection of so many people. It was an honor to call him a colleague.

And so, just as he brought warmth and generosity to those he played with during his time at Fitz, Eddie continued to contribute to College life long after he graduated, always ready to step up and help, by especially at social events. Matt Rogan (MML, 1993) recalls the experience of conducting a live interview with Eddie for the College Sports Dinner in 2017,

“I was uncharacteristically nervous in the build-up – mainly because I saw him as one of the best in the business. Whether it was commentating on international rugby or archery at London 2012, writing the perfect montage for those same Games or subsequently entertaining novels, I really couldn’t find anything he touched that didn’t turn to gold.

Fortunately, I had met Eddie a few times before. The last time was between 11 p.m. and 2 a.m. after a previous sports dinner, putting the world to the rights with other Fitz sportsmen from Middle R. When we met to prepare for the interview, I immediately felt at ease. Quickly, we concocted a quick plan for the interview of the night, hoping to inspire our guests, “40% smiles, 20% pride, 40% desire to make it a very late night again.‘

The interview happens to have fallen during a time of sporting controversy at Cambridge. The Hawks Club was considering opening its clubhouse to the Ospreys for the very first time. As we ended our session with some questions and answers, Eddie was asked a slightly pointed question by one of the viewers who was clearly less in favor of this movement than most in the room. I knew this was the defining moment of our evening. Without even thinking, Eddie replied that the promotion of equality in sport had been a topic of discussion since the 19th century and that in his view there was no room for anything other than equal access and open to the whole sport, not to mention a clubhouse. .

A big, sustained round of applause from across the room followed, which perfectly captured the spirit of the Fitz sport we’ve all inherited. No time for privilege, politics or pettiness. Just friendship, empathy, and a belief in the collective power of the special place we were sitting in that night. Eddie struck the brief single-handedly in twenty eloquent words. It was, once again, a very late night!

Eddie’s commitment to the continued athletic life of the College was constant, and it is bittersweet that the final memory comes from the students of Fitz, Maya Hodgson (Geography, 2020) and Bethany Haran (Natural Sciences, 2020)the current President and Vice President of Fitz Sports & Societies,

“We were honored to welcome Eddie back to Fitzwilliam College for our annual Sports Dinner in June. His effortless storytelling, warm nature and humor shone through his memories of his times at Fitzwilliam. Eddie spoke about the longevity of our college community and the lifelong lessons he learned during his time here. We all consider ourselves incredibly lucky to have met him. While showing Eddie around the College grounds, he was marveled at places such as the Olisa Library and it was clear how proud he felt to be back in a place he says will always feel like “homecoming”.

Thank you Eddie, you will be missed.

In 2020 Matt McGeehan interviewed Eddie for Fitz, you can read the article here: https://www.fitz.cam.ac.uk/news/languages-and-rugby-interview-eddie-butler

Eddie’s voiceover for the UCS video in 2022: Sport belongs to everyone (https://www.youtube.com/watch?v=FIsHs1Pd_4E&t=8s)