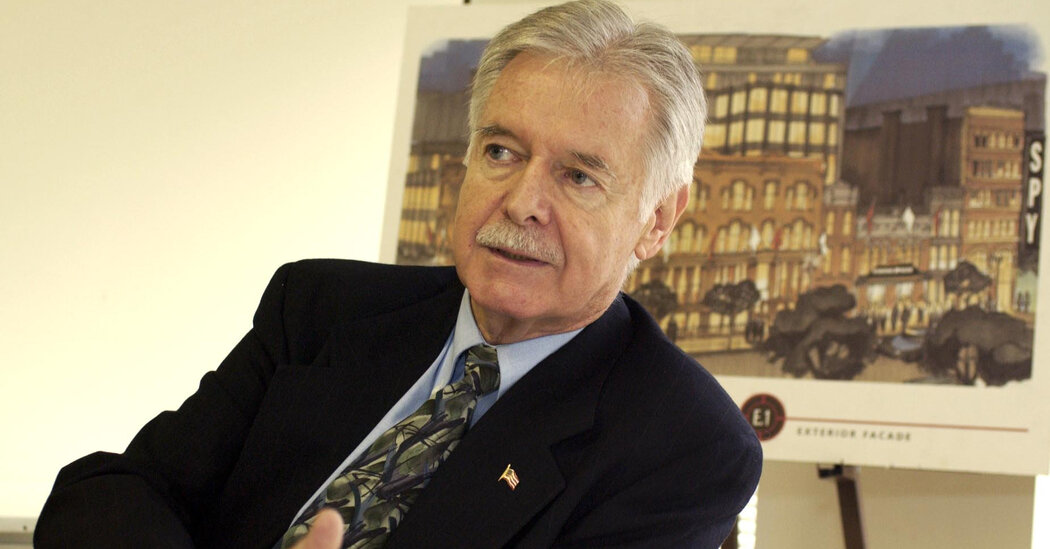 Peter Earnest, who spent decades running undercover agents for the CIA during the Cold War and later built on that expertise as the first executive director of the International Spy Museum in Washington, died on 13 February at a hospital in Arlington, Virginia. 88.

His wife, Karen Rice, said the cause was congestive heart failure.

Unlike many former intelligence operatives, who tend to be discreet, Mr. Earnest was a shrewd and passionate storyteller of his CIA career, including his years in Europe and the Middle East, where he recruited and managed agents involved in espionage. the Soviet Union and its satellites. These experiences – and his attitude – made him an excellent candidate to run a museum dedicated to international espionage.

One of his favorite stories involved a 1978 mission to protect and debrief a Soviet defector, Arkady N. Schevchenko, moving him undercover from his New York apartment to suburban Virginia. Mr Shevchenko, who was assigned to the United Nations as an assistant secretary-general, was already spying for the CIA, and Americans feared he was about to be caught by the KGB.

For several weeks, Mr. Earnest’s team interviewed Mr. Shevchenko – among his interrogators was Aldrich Ames, who later turned out to be a Soviet spy himself – and dealt with his endless requests for clothes, girlfriends and even vacations in the Caribbean. Mr. Earnest paid for everything, handing over money to the FBI handlers of the Russian defector.

FBI agents, accustomed to strict spending protocols, were astonished, he recalled in “Business Confidential: Lessons for Corporate Success From Inside the CIA” (2010), which he wrote with Maryann Karinch. “They said, ‘No one can distribute money like that except God.'”

Mr. Earnest’s last assignment with the agency was as its chief spokesperson. He showed a deft hand with the media as the CIA resisted the Iran-Contra scandal, the collapse of the Soviet Union and congressional pressure to declassify Cold War documents. In many ways he was successful, in part because the CIA base trusted him.

“It’s hard to be the public relations manager for a company that doesn’t want public relations,” Burton Gerber, who worked at the agency for 39 years, said in a phone interview. “We loved Peter because he was one of us.”

And some of the work, Earnest said, was fun: For example, he got to know Harrison Ford after he helped arrange a production team to visit agency headquarters to film “Patriot Games (1992), the first time a movie was allowed to be filmed inside the building.

Such experiences made Mr. Earnest a natural choice to lead the International Spy Museum, a $34 million business that opened in downtown Washington in 2002. As executive director, he has been involved to everything from exhibitions and lecture series to public relations; he spoke to reporters almost as often as he did to the CIA

“Someone once said that if you could convince another person to spy for your country, you could probably sell anything,” said H. Keith Melton, a historian and collector who donated many spy artifacts that made up the museum’s initial holdings. “Peter had those skill sets.”

Mr. Melton, an early member of the museum’s board of trustees, was instrumental in hiring Mr. Earnest, and Mr. Earnest later helped persuade Mr. Melton to donate the major part of his remaining collection, approximately 7,000 items, including the ice ax used to assassinate exiled Russian revolutionary Leon Trotsky.

Mr. Earnest also understood the importance of making the museum more than just a tourist attraction. He organized advisory boards filled with intelligence officials and retired historians, and he built permanent and temporary exhibits that delved into arcane things like spycam technology and current events like the war on the terrorism.

And he added a personal touch to the museum: among his collection was a coat with a buttonhole camera he had worn while working undercover in Greece and Cyprus.

His efforts paid off. Some nine million people visited the museum between 2002 and its retirement in 2017, far beyond the founders’ original expectations, despite the fact that people have to pay admission in a city where many museums are free. (Adult tickets are now $26.95.)

“He was a true spy, who believed deeply and passionately not only in transparency, but also in helping the public understand what espionage is,” said Tamara Christian, president and CEO of the museum, during the interview. ‘a telephone interview. She added: “He wanted people to stop thinking of espionage as a James Bond movie.”

With his quick wit and dapper sense of style, Mr. Earnest was also a popular guest on television programs like “The Colbert Report“and radio shows like the NPR quiz show”ask me anotherwhose host, Ophira Eisenberg, wondered if spies really liked their drinks shaken, not stirred.

Wasting no time, he replied, “One after another.”

Edwin Peter Earnest was born on January 1, 1934 in Edinburgh, where his father, Edwin Burchett Earnest, was a diplomat in the American consulate. His mother, Emily (Keating) Earnest, born in England, was a housewife.

The family returned to the United States in 1939 and settled in Bethesda, Md. Peter’s father died of a brain tumor in 1946; his mother then became an American citizen and went to work for the State Department.

Mr. Earnest graduated from Georgetown University in 1955 with a degree in history and political science and immediately joined the Marine Corps, where he toured Japan. When he returned, his fiancée, Janet Chesney, who was already working in a CIA field office in Washington, urged her superiors to recruit him.

His marriage to Mrs. Chesney ended in divorce. He married Mrs. Rice, who also worked at the CIA, in 1988. He is survived by four daughters, Nancy Cintorino, Carol Earnest, Patricia Earnest and Sheila Gorman, all from his first marriage; six grandchildren; and eight great-grandchildren.

Mr. Earnest worked in the agency’s clandestine service for 25 years, after which he worked in the office of its inspector general and as a Senate liaison. He arrived in the late 1970s to ease relations with Congress after the so-called Church Committee exposed the CIA’s years of involvement in coups and assassinations.

Although Mr. Earnest was careful not to glorify the intelligence work, he also seemed to enjoy occasionally pulling back the curtain on the life of the spy.

In an interview for the International Spy Museum, he recounted being tasked with planting a bug in the home of someone his superiors suspected of being a double agent. One evening, the suspect invited Mr. Earnest and his wife to a small reception at his home.

When the host wasn’t looking, Mr. Earnest, dressed in a tuxedo, slipped into the man’s office, where he slipped under his desk, drilled a hole and planted a device. listening, putting a handkerchief to his chest to catch the sawdust. . He returned to the party unnoticed.

It was, he said, his “Bond moment,” and it worked: The bug captured a conversation between the suspect and his handler on the other side.

“But for a moment,” he said, “lying under that desk, I must have thought what my response would have been had he walked into that office.”

The latest news on the Ukraine-Russia crisis: live updates