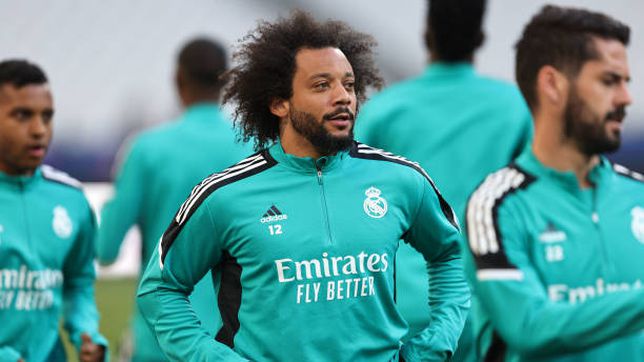 Marcelo: ‘I don’t want a statue, I wrote my story at Real Madrid’

Real Madrid captain Marcelo joined Thibaut Courtois and Carlo Ancelotti to answer questions from the press ahead of Saturday’s game Champions League Final. For the Brazilian left-back, who joined Madrid as a teenager in 2007, the final against Liverpool will be his last game for the club even if it is unlikely that we will see him on the lawn of the Stade de France. Marcellowhose contract ends at the end of next month, gave way to Ferland Mendy who will face Klopp’s Reds.

The chance to win a fifth Champions League“We are excited and hopeful, we have spent many years playing in this competition and we know what it means to play in a final. It’s been a great season and we deserve to be here. We can’t wait to finish it.”

Post-Madrid projects: “Everyone knows my passion and my love for the club of my life – Real Madrid. It was Fluminense back then, they gave me everything when I started and Madrid gave me everything too. I I don’t want to say what I’m thinking right now. I don’t want a statue, I made my history in Madrid and I will continue to do so. After the final, we’ll see what we can do”.

Benzema: “We know the quality of Karim, he is having an incredible season. He’s been playing well for a while. He’s a leader, just his character and his presence help the team a lot – and not just this season.”

Pre-match nerves“I’ve been nervous since we got to the final. We know what it means to defend this club in the final. Nerves usually begin to strengthen the night before.”

Ancelotti“I have known him for eight years, I had the chance to train with him. He understands football and knows how to manage the locker room. It’s understandable that we all want to play every game. This season we haven’t had any problems, the boss reassures us, he tells us the truth. And it gives you the confidence to work hard.”

Taipei book exhibition will focus on France, with a nod to Ukraine