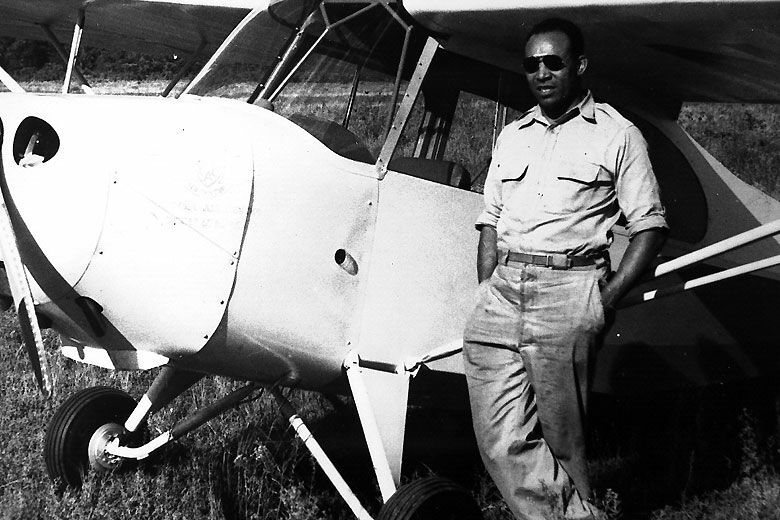 In an age of segregation, Columbia Air Center gave black pilots a chance

In the 1940s, a farm nestled beside the Patuxent River in Prince George’s County, Maryland became an airfield that would open new doors for aspiring black pilots.

This report is part of OMCP’s coverage of Black History Month. Read more stories at WTOP.com.

In the 1940s, a farm nestled beside the Patuxent River in Prince George’s County, Maryland became an airfield that would open new doors for aspiring black pilots.

They were not allowed to learn to fly at their local airports. The land was called the Columbia Air Center, and during a time of segregation anyone could come to Croom to pursue their love of aviation.

The museum houses an exhibit that tells the story of the air center, which was first run by John W. Greene Jr., a black aviation pioneer. Greene also started the Cloud Club, a flying club which he transferred to the Air Center, after racial tensions at an airfield in Virginia.

It was originally known when it opened in 1941 as Riverside Field and was occupied by the United States Navy during World War II. After the war, Greene reopened the airfield as Columbia Air Center.

Davidson said the air center at Croom Airport Road was also formed with the help of Willa Brown, who was the first African-American woman to earn both a pilot’s license and a commercial license.

During the time the airport was operating, black residents who wanted to obtain their pilot’s license could not use many area airports, including College Park Airport.

“They had to drive an extra 30 to 40 minutes just to learn how to fly,” Davidson said.

Davidson said the flight school was incorporated, based on footage of Greene’s classes that are now on display at the College Park Aviation Museum. For many who studied there not only to fly but also to become aircraft mechanics, this air center was crucial.

“Some of these people would never have become pilots without the Columbia Air Center,” Davidson said.

The center became the largest black-owned and operated airport in the country during its time, according to Davidson. The Maryland-National Capital Planning and Park Commission notes that it was home to the first black civilian air patrol squadron in the DC area, called the Columbia Squadron.

Only the stories and pictures of the Columbia Air Center remain, but the museum was able to find and restore a gas pump that once powered planes at the site. It is presented in the exhibition.

In other museum exhibits, the stories of some of the members of the Cloud Club are also told. You can visit the museum from Tuesday to Sunday from 10 a.m. to 4 p.m.

If you visit the site of the airfield, which is now Patuxent River Park, a monument stands in honor of the Columbia Air Center.

Get the latest news and daily headlines delivered to your inbox by signing up here.

© 2022 OMCP. All rights reserved. This website is not intended for users located in the European Economic Area.

Putin’s distortions of history do not justify war

Relations with Russia could harm thousands of European companies