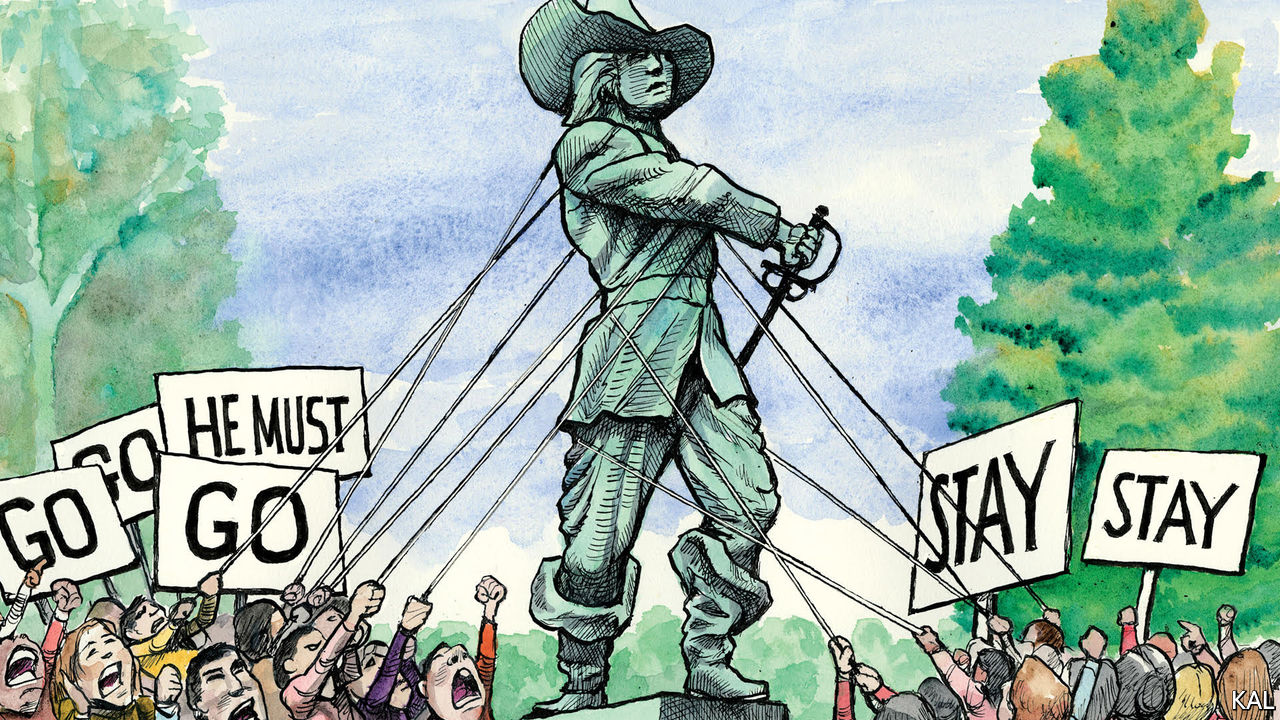 How Culture Wars Can Show What’s Right With America

A COUNTRIES OF WHICH national officials can barely agree to pay government salaries or cover debts is a poor candidate for exploring how to tell one’s national story. And America does not fail to disappoint. Nationally, debates over American history are as unsatisfying as other culture wars between left-wing inquisitors and Trumpist berserkers, who rave about each other while exhausting everyone.

Enjoy more audio and podcasts on ios Where Android.

The struggle is more uplifting at the local level. There, the debates are not about general claims of lionizing fanaticism or the erasure of history – not, in other words, about abstract representations of representations – but about the bronze or stone symbols themselves. . Should this statue in the town square stay or go? Such a debate is underway in Hartford, Connecticut, over the marble statue of an Englishman who has been shining for more than 100 years from the north facade of the state capital.

In the 17th century, John Mason was a deputy governor and interim governor of Connecticut who helped draft the charter giving the colony unusual autonomy from the British crown. But he became a hero to the early settlers and their descendants as a soldier, in what is called the Pequot War. A story from the middle of the last century, for example, credits Mason with having saved the embryonic colony from extinction by “the red menace”. “The Pequot threat has been removed from the valley forever,” reads a typical story of the victors.

Mason accomplished this with an atrocity: on May 26, 1637, he led soldiers to set fire to a Fort Pequot and then kill over 400 people inside, be they warriors, women or of children. It was a watershed moment in the entrenchment of the English settlers and in establishing a standard for their treatment of the natives. On the capitol, Mason is represented in combat gear, sword in hand.

“There is no doubt that Mason is engaged in what we now call genocide,” Rodney Butler, tribal president of the Mashantucket Pequot tribal nation, said last month in a recorded message, during a hearing for the state commission that’s supposed to recommend the statue’s fate on December 14. “I ask you, is this a man we should be celebrating in this great state of Connecticut?” “

There is no moral way to answer yes, although the miniature description of the attack oversimplifies things that historians and archaeologists are still piecing together. This period in the Connecticut River Valley was a time of precariousness, terror, and shifting alliances between native people and English and Dutch settlers. The Pequots had recently besieged settlers in Saybrook, killing and wounding 20, then attacked the village of Wethersfield, killing nine men and two women and kidnapping two girls. At the time, there were perhaps 250 able-bodied Englishmen throughout Connecticut. Mason’s 76 soldiers were supported by some 300 allies from the Narragansett and Mohegan tribes, eager to expel the dominant Pequots from the region.

“We were absolutely unprepared for the brutality that followed,” Marilyn Malerba, chief of the Mohegan tribe, told the commission, while pleading for the removal of the statue. “It was not our form of conflict.” She spoke, like others, as if the battle had taken place just a few years ago. Listening to the speakers, including a descendant of Mason to defend the surname, it was easy to understand the observation of Kevin McBride, an anthropologist, that “the Pequot war is still unfolding in many communities”.

Walter Woodward, the state historian, argued that if the statue remained in place, it could serve not to celebrate but to educate about the true nature of the story and its actors. Connecticut’s past, he said, “is filled with injustice, pain, inequity and violence.” He noted that while former lawmakers placed a dozen statues of early rulers in alcoves in the capital, they had long stopped trying to tell the Connecticut story, leaving eight alcoves vacant. Why not provide a truer and more granular narrative, “rather than continue to think that we are going to make the state capital a cathedral of centuries of lay saints?”

Built in the 1870s, the Capitol, with its kaleidoscopic interior, looks more like a cathedral crossed by a genie lamp. It is a monument in itself, not only to democracy but to an exuberant era when not only the cruelty of the settlers but also the ingenuity of the Yankees made Hartford rich and cultured, a city which counted Mark Twain among its inhabitants and Charles Dickens among his visitors. The Colt Armory, which made patented revolvers, was for a time the largest private arms manufacturer in the world.

Hartford, like much of Connecticut, is more in tatters today. Yet the pride of the speakers in their state was refreshing and not without motives, notably the success of some indigenous tribes. The day before the hearing, Mr. Butler announced the opening of the last Mashantucket Pequots casino in Puerto Rico; days later, the Mohegan finalized a $ 1.55 billion funding round for the resort they are building on Yeongjong Island in Incheon, South Korea. There is much to celebrate and to argue about, as there always is. It is high time that the people of Connecticut and other states also started to disagree on which statues they should create.

This is not the first time that Americans have argued over their symbols; it’s not even the first time that Connecticut people have argued over a statue of John Mason. They tend to have these conflicts once in a generation and then forget again. Forgetting is the problem. The American spirit, writes Henry Adams, a historian, “is the only one in history for its ignorance of the past.” Whether a given statue remains or disappears, an ongoing argument among citizens would be the best representation of the American effort. Without this, the statues will become silent again. As Daniel Menihan junior, another leader of the Mashantucket Pequots, put it, the Mason statue “has been around for a very long time, and it hasn’t educated many people at all.” ■

For an exclusive preview and reading recommendations from our correspondents in America, sign up for Checks and Balance, our weekly newsletter.

Read more from Lexington, our columnist on American politics: