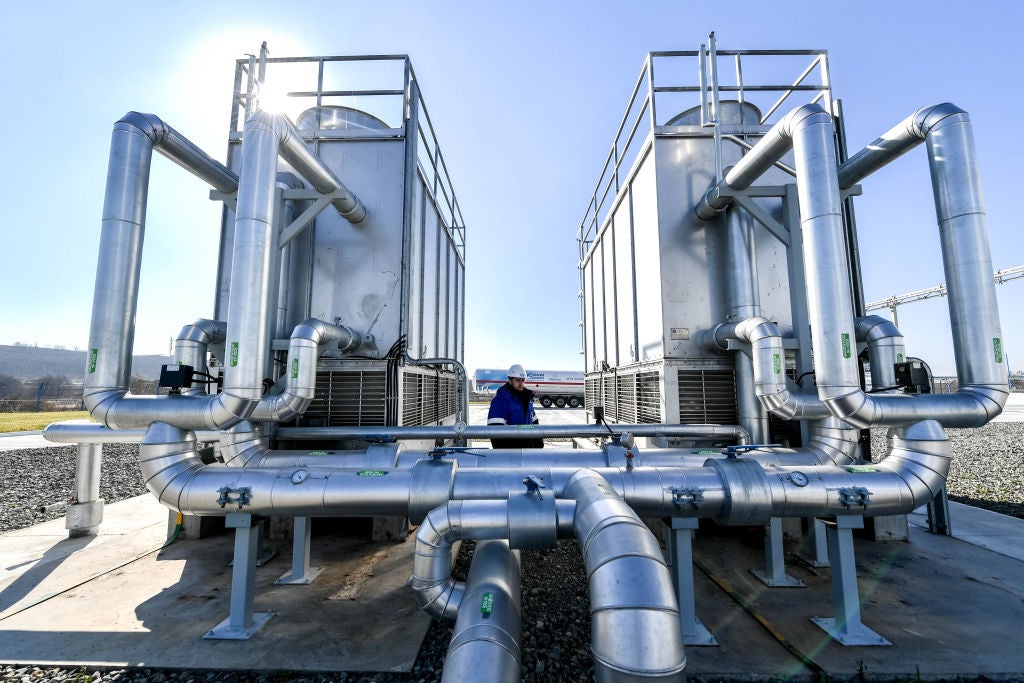 The penalties are piling up. Seven Russian banks, including its second largest, VTB, will be barred from SWIFT, the backbone of international financial transactions. Companies like Apple, Ford, Nike and Siemens have announced their withdrawal from the Russian market. Oil majors including Shell, BP, ExxonMobil and Equinor have said they will leave the country.

What would hit Russia hardest, however, would be to end imports of its fossil fuels, with the oil and gas sector providing around 40% of federal government revenue. Russia provides 40% of Europe’s gas and 25% of its crude oil; a painful irony of the current war is that Europe is effectively paying for the invasion of Ukraine through its fossil fuel imports.

The immediacy of the Ukraine crisis means that finding alternative sources of gas – whether from close partners like Norway or Algeria, or via LNG imports – will likely be part of any strategy to quickly break links with the Russian economy. Accelerating Europe’s energy transition – which would mean reducing the share of gas in the electricity mix, improving energy efficiency and replacing gas boilers with heat pumps – is another effective solution to harm Russia, with the added benefit of being good for the planet. However, how quickly can such an accelerated transition actually take place?

Gas powers around a fifth of electricity generation in Europe. While some countries have seen gas production increase as they move away from dirtier coal in recent years, others have dramatically reduced gas production. As shown in the graph below, the Netherlands (-17 TWh/-24%) and Spain (-15 TWh/-18%) respectively experienced massive declines in gas production in the space of only two years, in favor of renewable energies.

Data, insights and analysis delivered to you
See all newsletters
By the Energy Monitor team
Subscribe to our newsletters

In total, think tank Ember calculates that more than half (52%) of new renewable generation since 2019 has replaced gas (and a third nuclear and a sixth coal). This compares to 2011-2019, when more than 80% of renewable energy replaced coal. Ember data also shows that the Netherlands, Spain and Greece have all seen their share of solar and wind generation increase by around 10% in just three years.

Policies aimed at further accelerating the deployment of solar and wind energy, and thus reducing Europe’s dependence on Russian gas, will have no immediate impact. “But renewable energy growth can be much higher than expected from 2024-2025, provided the policy framework is in place now,” Moore says. He suggests that the European Commission tackles administrative hurdles like permission to make this a reality, as “process, not cost, is now the main obstacle to development”.

In a briefing released to coincide with Russia’s invasion of Ukraine, think tank E3G also advocates a “rapid expansion of renewables and interconnections for the power sector”, which aims to “reduce structural dependence on gas for balancing the system”. E3G adds that by 2026, the EU could install 90 GW of wind energy (compared to 10 GW in 2022, according to GlobalData, Energy monitorfrom the parent company) and 50 GW of solar energy (instead of 25 GW). The think tank says this would require “a further push on permissions” and an “accelerated deployment of a shared network in the North Sea”.

Ember data shows that countries with high solar potential (such as Spain and Cyprus) and low solar potential (such as the Netherlands and Germany) now generate around a tenth of their electricity from solar energy. This suggests that effective government policy, rather than local conditions, has been a crucial factor in determining which countries have seen the greatest growth in renewable energy.

Gas provides about 35% of heating in Europe. Many experts now agree that it is through the deployment of electric heat pumps that we will move away from gas in this area. There were 14.8 million heat pumps in Europe at the end of 2020, data from the European Heat Pump Association shows. Some of the growth numbers for 2021 that have already emerged – for example, 53% for France and 54% for Switzerland – suggest that with the right policies in place, things can move forward quickly.

Norway has the largest share of heat pumps in Europe, with around one in four people. The technology began to appear in Norway after the 1973 oil crisis, when a government-funded program to encourage their installation was introduced. However, it was in the 21st century that growth really took off, thanks to generous government subsidies, high taxes on fossil fuels, cheap electricity and the banning of oil-fired boilers in 2020.

[Keep up with Energy Monitor: Subscribe to our weekly newsletter]

A policy to rapidly increase heat pump installations in other countries could have a significant impact. Jan Rosenow, from think tank The Regulatory Assistance Project, points out that the UK currently installs around 1.7 million gas boilers a year, which is significantly higher than the estimated 67,000 heat pumps installed in 2021. Rosenow estimates that if the UK were to install 1.8 million heat pumps a year for the next two years, the country could eliminate all Russian gas imports, which account for around 5% of UK gas.

However, there is a risk that the horror of what is happening in Ukraine will lead policymakers to focus only on changing the gas supply. “I think the focus is likely to shift from emissions reductions to energy security and energy cost in the future,” suggests Biraj Borkhataria of investment bank RBC Capital Markets.

Allen Good, an energy analyst at financial services firm Morningstar, also believes the priority will be finding new sources of gas, with US LNG likely to be a big part of the solution. However, he says: “Russia is so deeply entrenched in the European market, and support for new domestic gas production is weak in European countries, that it is not possible to simply flip a switch. to change providers.

The Carbon Tracker think tank recently suggested that European policymakers use the Ukraine crisis as a catalyst to further accelerate the deployment of clean energy systems. Accelerating the energy transition also makes sense from an economic point of view; the EU pays about 360 billion euros ($393.13 billion) a year to import fossil fuels, a sum equal to the clean energy investments needed for the bloc to meet its 2030 “Fit for 55” climate targets . Diversification into renewables reduces the financial risk of stranded assets more quickly and will provide electricity that is more competitive than gas in most markets.

The International Energy Agency released a ten-point plan on March 3 that the agency said could cut dependence on Russian gas by a third in just one year. It includes more practical recommendations for security of supply, such as replacing Russian supplies with gas from alternative sources and introducing minimum gas storage obligations. It also calls for “accelerating the deployment of new wind and solar projects” and further improving energy efficiency, pointing out that currently only 1% of the EU’s building stock is renovated each year.

Inside the hidden moated house on the market for almost £2million