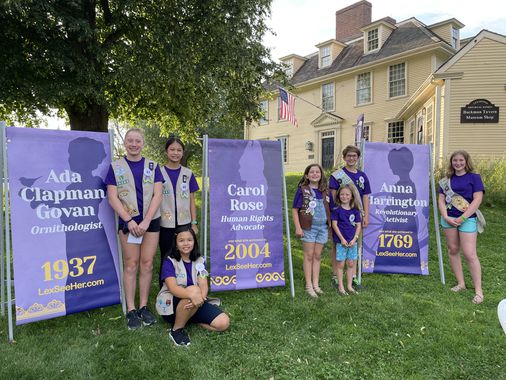 History dominates the city of Lexington, from pre-colonial times to the American Revolution and to the present day. Now, the women behind much of this story stand in silhouette on banners made by local Girl Scouts.

Girl Scout Cadette Troop 66265 created the banners in collaboration with LexSeeHer, a local group working to establish a permanent monument to women in Lexington.

The banner project was part of the troop’s efforts to earn Silver Awards, the second highest honor a Girl Scout can receive. The banners show 42 Lexington women who have made their mark locally, nationally and around the world.

The banners will be displayed along Massachusetts Avenue until the end of August.

Seventh-year troop leader Lauren Kennedy said she hoped the project could raise awareness of LexSeeHer’s efforts to erect a statue in honor of the women of Lexington.

Kennedy, who is owned by LexSeeHer, brought the project to the troupe’s attention last year and helped the girls learn about important local women. They discussed figures such as Margaret Tulip, a female slave who used the justice system to gain her freedom in 1768; Revolutionary activist Anna Harrington, who organized a 50-person ‘Spinning Bee’ to protest UK taxes on textiles; novelist Ada Clapham Govan, who wrote and published “Wings at my Window” in 1940; and current human rights defender Carol Rose, executive director of the American Civil Liberties Union of Massachusetts.

At one point, Kennedy and the troupe traveled to the Lexington Historical Society to view the “Bold Women of Lexington” exhibit. Even though many activities were canceled during the pandemic, the girls worked on their banners.

“Our first step was to determine which women to make visible. We met people in town who helped us find out more and we did some individual research, ”said Girl Scout Andrea Le in a statement from LexSeeHer.

After months of research, the girls dressed in period clothing reflecting the times the different women lived. Kennedy photographed them, transformed the images into silhouettes and designed the banners.

“For our Silver Award project, we wanted to show people the importance of women in our history, and we wanted to highlight some of the women who have done important things in our past,” said Meghan Caldera, troupe member. , in the press release.

“We wanted to educate people about the women of Lexington and encourage people to use their voices and express themselves,” added Ainsley Cuthbertson.

Kennedy says LexSeeHer has raised $ 200,000 in private donations for the statue and is trying to raise an additional $ 100,000. A private donor has pledged $ 50,000 if LexSeeHer meets this benchmark to help the group reach their fundraising goal.

The proposed location of the monument is on the Massachusetts Avenue Lawn near Buckman Tavern, according to the LexSeeHer website. Additionally, Kennedy said three artists were under consideration, including Meredith Bergman, the artist behind the Boston Women’s Monument on Commonwealth Avenue.

Diana Bravo can be reached at [email protected]