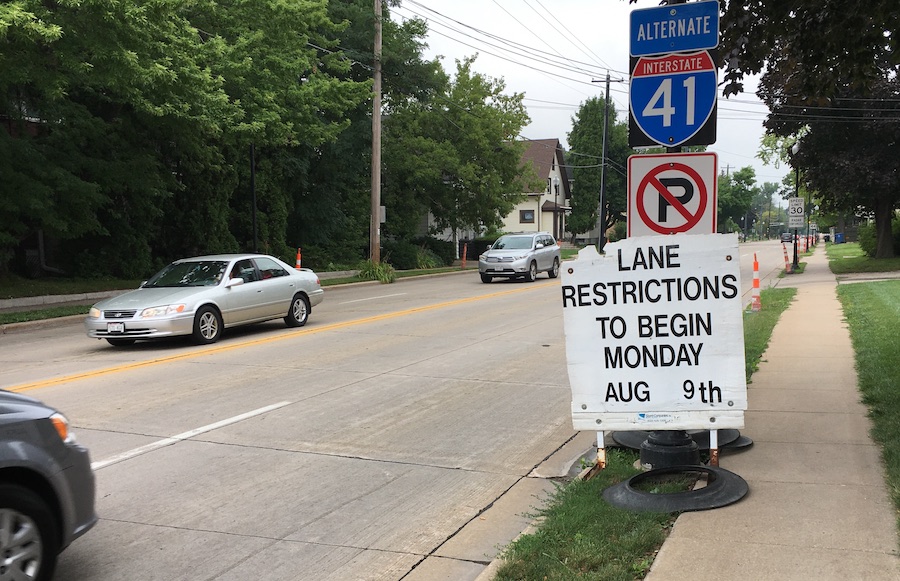 Welcome to the August 9 edition of HEADS UP OSHKOSH, where you’ll get a sneak peek at the news you’ll hear and talk about this week. This is our 29th issue of 2021.

A contractor will begin converting Jackson Street between Church and Murdock avenues from four lanes to three this week as part of a plan to slow speeds on the busy thoroughfare.

The street will be marked out so that there is one lane of traffic in each direction as well as a central lane for turns. At intersections equipped with lampposts, a lane reserved for left turns will be marked.

At its meeting on Monday, the park advisory board will review plans to update signage around the Chief Oshkosh monument in Menominee Park. The language proposed on the panels would provide a more comprehensive historical perspective on Oshkosh’s life and contributions. City staff raised concerns about the “length and academic style” of the current draft wording.

Earlier today Monday, Mayor Lori Palmeri and City Manager Mark Rohloff plan to meet with representatives of the city’s Diversity, Equity and Inclusion Committee, which approved the new signage, and members of the Monuments Commission, which began work on the project in 2015. Former mayor Steve Cummings, vice-chairman of the commission, criticized some of the proposed wordings as controversial and recommended that the city return a gift of $ 5,000 from the Heaney family that was intended to pay for the new signage.

The Madison-area company chosen to develop the northern end of the Sawdust District will be making its taxpayer aid advocacy case at the Common Council on Tuesday.

T. Wall Enterprises said it plans to spend between $ 65 million and $ 75 million between next year and 2029. It is seeking additional funding of $ 12 million to $ 20 million, according to documents it prepared for the advice.

The company has yet to produce drawings for the three buildings it is considering, but will show the council some general design concepts. In addition to offering a public “Sawdust Park” with an amphitheater that could be used for concerts and community gatherings, the developers say they are also considering an ice rink.

The old Smith School will be converted into low-income apartments, according to a presentation the developers will make to the Common Council on Tuesday. The target market will be households earning 50 to 60% of the county’s median income.

The developers are planning 31 apartments and estimate the development cost at $ 8.1 million. They are seeking additional funding from the city as well as state tax credits for historic properties and social housing.

The liquor license can be taken back

The liquor license for the Brass Rail on Algoma Boulevard is under review because it has not been used for the past two years. License holder Paul Winter, resident of Winneconne, pointed to extenuating circumstances, saying the bar was closed due to COVID and it took him until June to evict the former bar operator.

The board will consider the matter at its meeting on Tuesday. He could decide to take back the license or allow Winter to find a new tenant to run the bar.

School board asked for approval of leadership changes

At its meeting on Wednesday, the school board will be called upon to approve a series of administrative appointments triggered by the upcoming construction of a centralized college on the north side.

Superintendent Bryan Davis proposes to appoint two vice-principals for the Northside School, Amy Hughes and Jake Koellermeier. They would report to Kristi Levy, who has been appointed principal of Northside College.

The current director of Webster Stanley Middle School, Philip Marshall, would be transferred to the leadership of Shapiro STEM Academy. It is recommended that the Institutional Head, Trina Anderson, occupy a “Assignment Director” position.

“The principal on assignment is responsible for promoting the growth and development of principals through a coaching model as well as overseeing all aspects of the OASD eAcademy,” according to a press release from the school district of the Oshkosh region.

The school board will get a recommendation on Wednesday to move to self-financing health care costs for district employees. The district is considering a premium increase of 9% or more for next year and expects that within five years, the self-financing option could generate annual savings of more than $ 3 million.