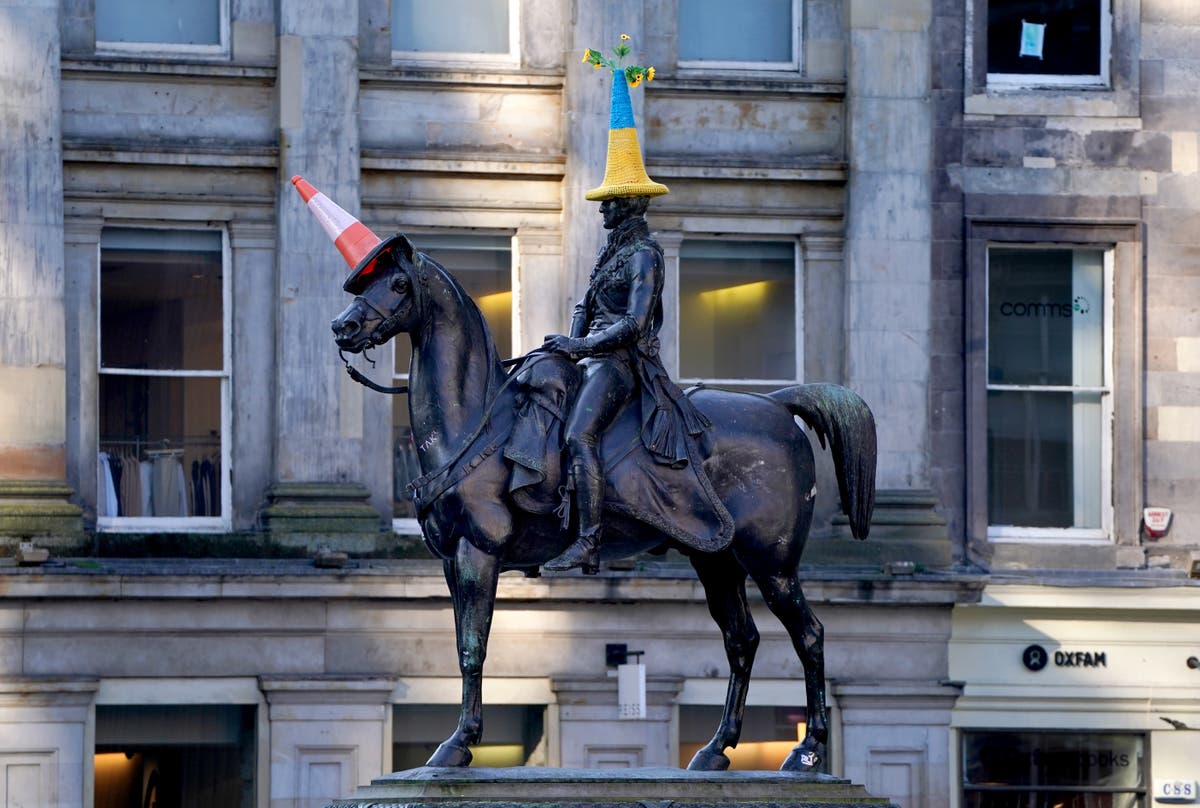 The traffic cone that adorns the head of a Glasgow statue has been given a Ukrainian makeover to show solidarity with the people of the war-torn country.

Pauline McWhirter decided to use her crochet skills to create a blanket for the cone in the yellow and blue of the Ukrainian flag, with sunflowers emerging from the top.

Her husband then climbed a ladder to place the marker above the Duke of Wellington statue outside the Gallery of Modern Art in central Glasgow on Sunday evening.

Ms McWhirter, 55, from Glasgow, has previously crocheted decorations for letterboxes and turned her hand to a traffic cone after her daughter suggested it.

She told the PA news agency: “Probably, like everyone in Glasgow, everyone feels a bit helpless in what we can do and how we do it.

“For me the only thing I had was a tiny bit of power in the hook to take a stand so I hooked the hat and my husband put it in place and it’s basically to send a message that we stand in solidarity with Ukraine.

“I just did it in one day. It’s just awful to see what’s happening in Ukraine and everyone feels so helpless. People make Glasgow, that’s just the truest saying we have never invented.

“This cone is a very, very, very small gesture and it’s just something we came up with as a family. It was my daughter Emma’s idea and my husband put it together, I don’t I only did the hook. As he put it in place, passers-by started cheering and clapping, which was really nice.

She added: “If we can send a message to a Ukrainian person residing in Glasgow then the job is done.”

Her daughter Emma Shearer tweeted a video of the cone being put up and wrote: “Proud of my mum for making this Ukraine themed cone & her husband @GarryMcwhirter doing the honors of Glesga placing it…on the duke’s head.”

Garry McWhirter tweeted: ‘The iconic Duke of Wellington statue in Glasgow has a new hat’ in a post that garnered over 29,000 likes.

This isn’t the first time the statue’s usual orange and white traffic cone hat has been replaced with a themed headgear in a nod to the news.

Plans in 2013 to elevate the statue to prevent cones being placed on its head were withdrawn after public outcry.

Photos: Odessa prepares its defenses against fears of a Russian attack | Gallery News