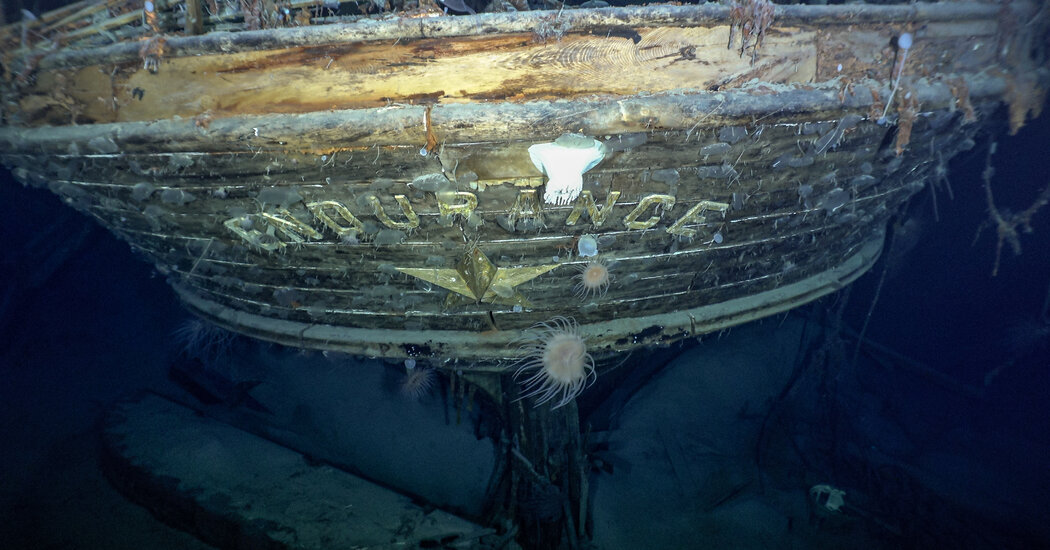 Ernest Shackleton’s ship Endurance, lost in 1915, is found in Antarctica

The wreckage of the Endurance has been found in Antarctica, 106 years after the historic ship was crushed in pack ice and sank during an expedition by explorer Ernest Shackleton.

A team of adventurers, marine archaeologists and technicians located the wreckage at the bottom of the Weddell Sea, east of the Antarctic Peninsula, using underwater drones. Battling sea ice and freezing temperatures, the team had been searching for more than two weeks in a 150 square mile area around where the ship sank in 1915.

Endurance, a 144-foot three-masted wooden ship, holds a revered place in polar history as it spawned one of the greatest survival stories in the annals of exploration. Its location, nearly 10,000 feet deep in some of the most icy waters on the planet, has placed it among the most famous wrecks that have not been found.

The discovery of the wreckage was announced Wednesday in a statement from the Endurance22 research expedition.

“We made polar history with the discovery of Endurance and successfully completed the world’s toughest search for wrecks,” said expedition leader John Shears.

The first images of the ship since those taken by Shackleton photographer Frank Hurley have revealed parts of the ship in stunning detail. An image of the stern showed the name “ENDURANCE” above a five-pointed star, a holdover from before Shackleton bought the ship, when it was called Polaris. Another showed the ship’s rear deck and wheel.

A video provided by the expedition organiser, the Falklands Maritime Heritage Trust, showed the bow and parts of the deck and hull.

Mensun Bound, the expedition’s exploration director and a marine archaeologist who has discovered many wrecks, said Endurance was the best he had ever seen. It is upright, clear of the seabed and “in a brilliant state of preservation”, he said.

The ship was found about four miles south of the last location recorded by Shackleton’s captain and navigator, Frank Worsley. The search had been conducted over a wide area to account for errors in Worsley’s navigational equipment.

Endurance’s relatively pristine appearance was not unexpected, given the cold water and lack of wood-eating marine organisms in the Weddell Sea that have plagued shipwrecks elsewhere.

Mr Bound also described the wreckage as “intact”. Although photographs of Hurley before the sinking showed extensive damage and collapse of the ship’s mast and rigging, and damage to the hull, Mr Bound had expected most of the ship to be in one piece.

Video from the expedition showed what appeared to be broken masts and damage to decks.

The wreck hunt, which cost more than $10 million, provided by a donor who wished to remain anonymous, was carried out from a South African icebreaker that sailed from Cape Town in early February. Other than a few technical glitches involving the two submersibles and part of a day spent in the ice when operations were suspended, the search went reasonably well.

The battery-powered submersibles combed the seabed twice a day, for about six hours straight. They used sonar to scan a strip of the smooth seabed, looking for anything that rose above. After the wreckage was located several days ago, the equipment was replaced with high-resolution cameras and other instruments to take detailed images and scans.

Under the terms of the Antarctic Treaty, the six-decade-old pact to protect the region, the wreck is considered a historical monument. The submersibles didn’t touch it; the images and scans will be used as the basis for teaching materials and museum exhibits. A documentary is also planned.

Shackleton sailed from England aboard Endurance with a crew of 27 in 1914, bound for a bay in the Weddell Sea which was to be the starting point for an attempt by him and a small group to be the first to cross Antarctica. It was near the end of what has become known as the heroic age of Antarctic exploration, which included treks by Norwegian Roald Amundsen, who in 1911 was the first to reach the pole, and by Robert Falcon Scott, a Briton who died after reaching him a month later.

Global setbacks. The war in Ukraine and political considerations complicate efforts by the United States and Europe, the two biggest polluters in history, to slow global warming – just as scientists warn of intensifying risks .

A world on fire. A United Nations report concluded that the risk of devastating wildfires around the world could increase by up to 57% by the end of the century, as climate change further intensifies what the authors of the document described as a “global forest fire crisis”.

Shackleton never reached the pole or beyond, but his leadership in rescuing his entire crew and his exploits, which included an 800-mile open boat voyage across the dangerous Southern Ocean to the island of South Georgia, made him a hero in Britain. .

Shackleton was tripped over by Weddell’s notoriously thick and durable sea ice, which results from a circular current that keeps a lot of ice inside. In early January 1915, Endurance became stuck less than 100 miles from her destination and drifted with the ice for over 10 months as the ice slowly crushed her.

When the ship was damaged, the crew set up camp on the ice and lived on the ice until it broke five months after the sinking of the ship.

The Weddell Sea still remains much icier than other Antarctic waters, although in recent years ice conditions have been lighter than usual. This was the situation this year, and it helped the expedition to reach the research site more easily and stay there safely. The icebreaker, Agulhas II, left the search area on Tuesday for the 11-day return voyage to Cape Town.

In addition to the expedition team, several ice researchers were on board, including Stefanie Arndt from the Alfred Wegener Institute in Germany. Dr Arndt, who studies how Antarctica’s sea ice may change as the world warms due to human-made greenhouse gas emissions, and others have spent a lot of time on ice drill cores. On Monday, she said on Twitter that they had collected 630 samples from 17 locations, which she called “an incredible number”.

Kremlin says US has declared ‘economic war’ on Russia