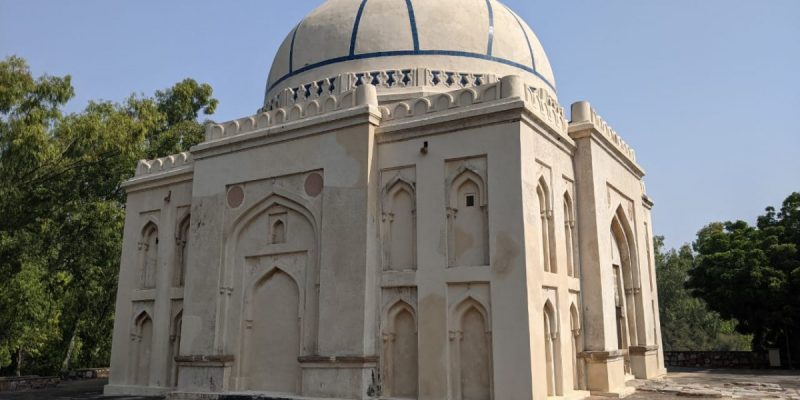 Delhi’s Bara Lao ka Gumbad is getting a makeover, but what does conservation really mean?

Delhi recently witnessed the renovation of Bara Lao ka Gumbad, a Lodhi era tomb in South Delhi’s Basant Lok, with new lighting and landscaped gardens. The gumbad is one of a long list of monuments that have been given a facelift over the past decade. This dynamic of improvement, embellishment and renovation of the heritage has important socio-economic implications and uncomfortable contradictions, in particular if one turns to the supposed â€œinvadersâ€ in and around these sites.

There is also the post-neo-liberalization trend of agreements between private entrepreneurs, heritage organizations and government in organizing such campaigns to consider. These have led to both successful projects and dismal failures.

For example, the Taj Heritage Corridor plan in 2003 involved several private sector and government agencies. He proposed a corridor connecting the Taj with various monuments and beautifying the complexes, and cost the government Rs 17 crore. This led to several FIRs and a Supreme Court case. On the other hand, sites like the Sundar Nursery have been very successful.

Heritage conservation policy has many nuances and I do not attempt to judge them. Rather, I will tell the story of Bara Lao ka Gumbad based on what I have been able to collect from various documents to see if conservation efforts to retain the â€œoriginal formâ€ are misplaced.

During colonial times, Bara Lao ka Gumbad was located in what was the Palam tehsil of Delhi. South of Shah Jehanabad, Delhi was mainly divided into villages. The area behind the Priya complex (on the edge of Munirka village) was Kusumpur village, and this is where you would have found the gumbad.

Often the impression is that these old monuments have been abandoned. In a sense that is true: the villagers used them but had no desire for the aesthetics of the modern historian and fidelity to the “original” form. They plastered and built according to their needs. The gumbad has not been “preserved” by any definition – meaning an attempt to maintain its form without any change. If a roof was leaking, it may have been repaired without the previous shape and materials being replicated.

In the 1900s Delhi was preparing for the Durbar of 1911 and replacing Kolkata as the capital of the British Empire. In addition, tourism had increased. From this period, efforts to conserve Delhi’s historic structures took off on a large scale. Part of these efforts was the publication of a comprehensive four-part report of each structure, large and small, in all tehsils and villages in the district, with description, condition, ownership, value and conservation value.

In the case of Bara Lao ka Gumbad, records from 1914 show that the building was used by villagers to store fodder. The file also tells us that the villagers closed two of the doors to the tomb, but it does not explain why. Most of the document is a detailed description of the monument – its measure, conditions, orientation, materials, etc. The document indicates that the stones “have been removed” – presumably by the villagers of the baradari adjacent to the gumbad, speculatively for construction. The structure was deemed worthy of retention in the report.

Today, the Bara Lao ka Gumbad is part of a larger park that connects and contains other small monuments, also from the same period. All of these monuments, including the gumbad, have been classified as chamilat deh in terms of ownership. This means that it was common land (in possession of the panchayat) of the village of Kusumpur. More often than not, at least part of the land around the monument would also be chamilat deh Earth. The rest of the land (the park and adjacent) would contain the residences of the villagers. The conservation and landscaping of the gardens was clearly an upheaval.

Bara Lao ka Gumbad is certainly not an outlier. Most of the monuments (which I read about) were occupied by villagers – Purana Qila, Hauz Khas, Begumpur, Isa Khan’s Tomb, Tughlaqabad Fort and Lodi Gardens to name just one small selection. The colonial Archaeological Survey of India (ASI) did not recognize the village residences as legitimate property, arguing that these spaces were still government land and the residents were “squatters”. Incidentally, this meant that they were compensated for the loss of property but not land. Compensation was based on many social stratifications, the first of which was caste.

British attempts to retain the structures have often seen setbacks over the years: the spaces would be reoccupied by families, fall into disrepair, or be used by adjacent urban villages crowded to the brim. I have been going to the Priya complex since I was quite young, having lived nearby, and the park was clearly run down. The restoration of Vasant Udyan and the gumbad is an improvement. The park is greener, safer and more welcoming for women and families.

For better or worse, it has been restored rather than preserved: a facelift to its imagined “original” form rather than keeping it as it is. It involved re-tiling, plastering, repainting with new materials. But the new repairs to the site bear some echoes of the past. Praise for beautification is instantly condemnation of use based on need. There have been a number of people kicked out of the gumbad, although I couldn’t find any information on compensation or resettlement, if any.

Most reports describe the residents as “invaders”. A report gives us more details: there were around 15 families living in huts, while one lived in the tomb itself. The huts were bulldozed. The family in the tomb had lived there since 1943. The resident (Anup Singh) disputed that the land belonged to them via the wakf’s advice and had been passed down from his grandfather. Singh’s rationale for intergenerational use and the eviction campaign against ‘invaders’ are clear reminders of UK conservation processes. ‘Squatting’ and ‘encroachment’, terms that persist in British legal jargon, remain popular for defining this use with what is arguably a class-inflected understanding of heritage. A look at INTACH reports and Google searches for “monument” and “encroachment” will show that evictions are an integral part of conservation. 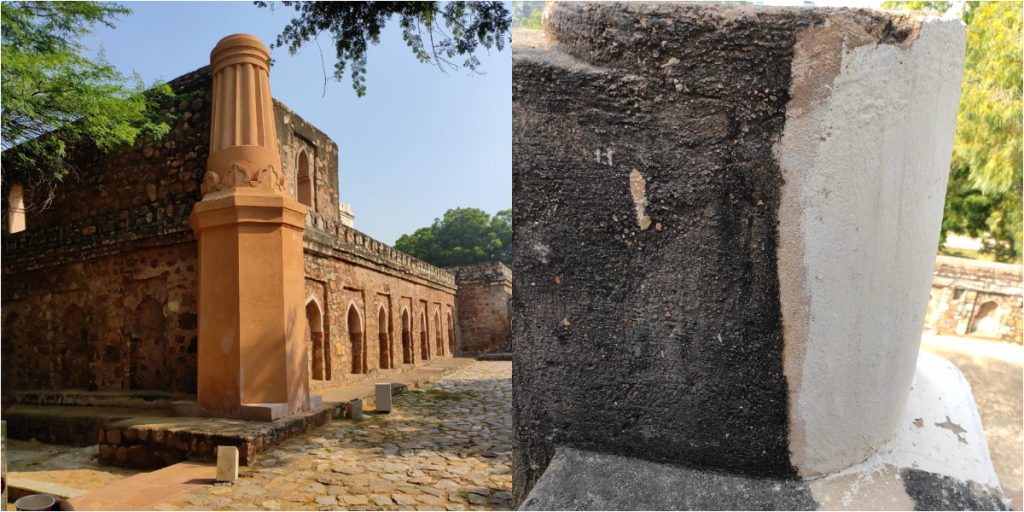 Left: a ridge has been renovated and the rest has been left in its previous state of conservation. Right: The front part has been repainted but the back has not. Photo: Ragini Jha

Authentic preservation is just one way to claim Delhi’s heritage. In a longer timeline and across larger spatial distributions, there are other ways of relating to history: it would be pride to pretend otherwise. I would dispute that the use of monument land as needed has not been less historic or relevant – it is built on generations of ownership and / or use.

The monuments have changed shape and form over the years. They have been reconstructed, their fragments have been reused and they have been repainted, modified and enriched by successive regimes. An original form often becomes difficult to define: is it before or after an emperor added to the work of a precedent? Or did a ruler add a jali around the closed tomb of a shrine a century later under Imperial patronage? Another example: Akbar built Adham Khan’s tomb in the dark to reduce maintenance and sponsorship. The concern for the building as a fixed time stamp is only one perspective in a dynamic system of engagement.

Today, monuments often (but not always) tell stories of nobility and are restored to recover imperial Delhi. But just like kings, villagers and laborers improved, rebuilt, enlarged and painted monuments as needed. They made their claims to history. In one of the many cases, the soon-evicted villagers from Hauz Khas asked the government in 1914 that they and their ancestors had lived there for over a hundred years and therefore had a valid claim to the land. Who can say that is not the case?

Cowboys, Medal of Honor Museum Hopes to ‘Bring People Together’ – NBC 5 Dallas-Fort Worth