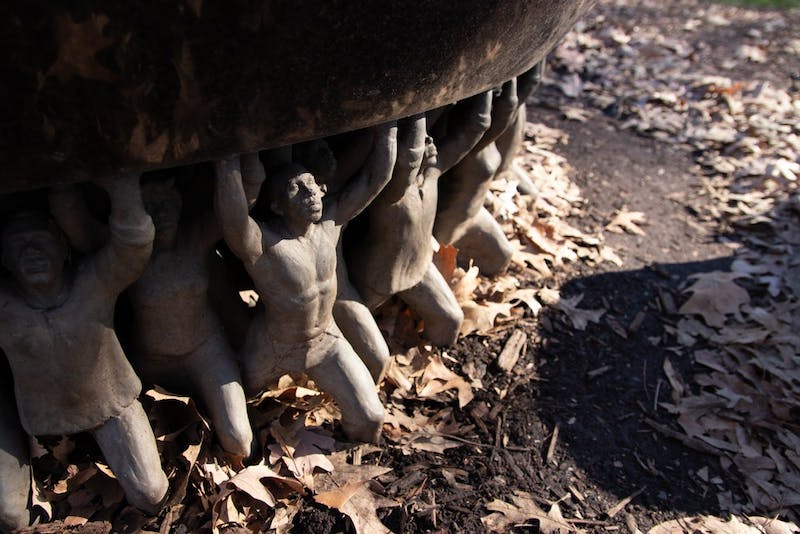 In the first of a two-part webinar series, the Commission on History, Race and the Way Forward discussed the original motivation for the Unsung Founders Memorial and community responses from the memorial’s inception to. ‘at its inauguration.

The webinar, which took place on October 18, brought together several panelists, including Byron Wilson, vice president of the 2002 class of UNC and one of the main organizers of the creation of the memorial to the little-known founders.

The memorial, a gift from the Class of 2002, was created to commemorate the enslaved men and women and their descendants who have built and sustained the life of the University since its founding.

The memorial consists of five stone seats and a black granite top, supported by 300 bronze figures. The size of the memorial is around two feet high, which some members of the community have deemed too small.

In recent years, university leaders have considered solutions to remedy the fact that the memorial to the little-known founders was sinking into the ground. The memorial was also vandalized by two individuals in 2019.

The webinar featured a pre-recorded message from artist Do Ho Suh, who defended his decision not to use a pedestal in the memorial.

“I didn’t want to use a pedestal because for me a pedestal represents traditional colonial power, uplifting individuals who often have terrible histories of trauma,” Suh said. “Unsung Founders is different. It presents a group capable of the deepest strength and integrity. These people should never be forgotten inside or outside the walls of the University.”

Wilson shared some of the challenges involved in proposing and establishing the monument, including the location of the statue. He also said that at the time the University “was not interested in the memorial”.

Another of the webinar panelists was Joseph Jordan, director of the Sonja Haynes Stone Center for Black Culture and History and vice-provost for academic and community engagement.

He said he remembers being struck by some of Suh’s other proposals from the Unsung Founders Memorial which were six feet tall, taller than the final product. Jordan also said there can be differences in an artist’s intention and in the way a piece is performed and handled by members of the audience.

“I don’t think we can try to distinguish between art and what we do to commemorate, that people find art where they find it,” Jordan said.

Jordan said he was also on the building and grounds committee at the time of the memorial proposal.

“I can tell you that the talks haven’t necessarily been heated,” Jordan said. “But they were sometimes brought up because some people had different ideas about where it was supposed to be placed.”

Some of the alternative locations included the Wilson Library side, the Steele Building and Rams Head Square on the South Campus, according to the panelists. The final location ended up being McCorkle Place, the upper quad on campus.

The webinar also featured members of the Chapel Hill community, who explained how the memorial impacted their lives.

Another of the webinar panelists was Commission member and historian Danita Mason-Hogans. Mason-Hogans, a seventh generation from Chapel Hill, said she was struck by the fact that the Chapel Hill generations were not involved in the conversation about how to honor their ancestors through this memorial.

“It strikes a little differently when you come from this area, and people talk about paying homage to your great-grandfather or your great-great-grandfather, and you are not part of that conversation,” he said. she declared. “And not only not to be part of the conversation, to kind of feel the need to express gratitude to the people who designed this monument because at least you’ve finally been recognized.”

Mason-Hogans said that had community members and black performers been brought to the table, some of the criticisms of the memorial could have been addressed sooner, rather than the burden on the students proposing the monument.

“I am so grateful for the work of the youth, and I hope we have learned how these processes really need to be reviewed, evaluated and changed,” Mason-Hogans said.

Wilson responded to this by saying that he felt he had done his best as a student, but agreed that the process could have been better and that he was also dissatisfied with the end results.

Panelist and retired UNC African-American studies and history professor Reginald Hildebrand said he had no recollection of having had conversations with students and colleagues about development until ‘in 2005, a few years after the memorial was proposed. He also said he was in dispute over a “difficult situation” regarding the memorial.

“There are certain difficulties and certain things that we have to overcome,” said Hildebrand. “But the starting point is that there are no villains in this story. There are a lot of heroes.

The second webinar in this series will be a conversation about the next step of the memorial. The date has not yet been released.

The Commission on History, Race and the Way Forward was founded in 2019 and was subsequently invited by Chancellor Kevin Guskiewicz in 2020 to explore the racial history of the University and make recommendations on actions to be taken. take into account the past of the UNC.

The full recording of the webinar is available on the committee’s website.

To receive the news and headlines of the day in your inbox every morning, subscribe to our email newsletters.