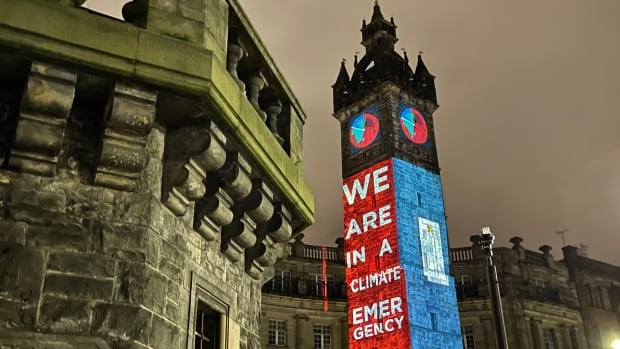 CBC Radio’s The House: Is COP26 our “last and best hope”?

On this week’s show: guest host Laura Lynch provides an overview of the negotiations and agreements expected at COP26, the United Nations climate summit which kicks off in Glasgow next week. Additionally, Denmark’s Climate Ambassador describes his country’s efforts to move away from fossil fuels and rally other nations, and the Maldivian Minister of Foreign Affairs and President of the United Nations General Assembly discusses greater climate threats facing island nations and the need for rich countries to help. 48:03

Making the most of the “last and best chance”

The COP26 conference in Glasgow, which begins next week, has been hailed as the “last and best chance” to stop catastrophic climate change. But ahead of the conference, is there any sign that countries have prepared – and the planet – for success?

Catherine Abreu, member of the Canadian delegation to the conference and leader of the Destination Zero group, and Jennifer Allan, who has attended around 40 UN conferences and is an adviser to the de facto dossier of global environmental negotiations – the Earth Negotiations Bulletin – join guest host Laura Lynch for a preview of what an effective COP26 would look like.

Plus: Anna Åberg of Chatham House and Taryn Fransen of the World Resource Institute provide a handy jargon breaker. Why is it called COP? What is an NDC? Both answer these and other questions about the technical language that tends to dominate climate change conferences.

19:33Making the most of the “last and best chance”

Two climate observers heading to COP26 – Catherine Abreu of the Destination Zero group and Jennifer Allan of the Earth Negotiations Bulletin – provide an overview of the conference, and two policy experts break down some of the must-see jargon surrounding the summit. 19:33

Although Canada obtains most of its energy from renewable sources, it is also one of the largest exporters of fossil fuels in the world.

This week saw the release of the Production Gap report, released by the UN and other research groups. It analyzes the gaps between countries’ plans for fossil fuel production and the amount of production that can actually occur while limiting the rise in global temperatures.

Peter Erickson of the Stockholm Environment Institute, one of the groups that co-authored the Production Gap report, tells The House why Canada’s oil and gas production is at odds with its climate goals. Simon Donner, professor at the University of British Columbia and member of the Canadian advisory body Net-Zero, explains what Canada needs to do to meet these goals.

Peter Erickson of the Stockholm Environment Institute explains why Canada’s oil and gas production is at odds with its climate goals, and climatologist and UBC professor Simon Donner explains what Canada needs to do to meet those goals. 8:47

The effort to end oil and gas

Several countries, including Canada, have said they will achieve net zero emissions by 2050 – while simultaneously approving new projects in their oil and gas industries. It is a “paradox”, said the Danish Minister of Energy.

This country is co-leading an effort called the Beyond Oil and Gas Alliance to get nations to support an explicit transition away from fossil fuels. Denmark’s Climate Ambassador Tomas Anker Christensen sits down with guest host Laura Lynch to discuss what he hopes to achieve and if Canada should join.

Denmark’s Climate Ambassador Tomas Anker Christensen talks about Beyond Oil and Gas Alliance, a new group that seeks to accelerate the phase-out of these industries. 9:18

A matter of life and death

Catastrophic climate change poses a threat to the entire world, but in a small island country like the Maldives, the threat is already all too apparent. And like many other vulnerable countries, the state lacks the resources to mitigate some of these climate-related risks.

Abdulla Shahid, Maldivian Foreign Minister and current President of the United Nations General Assembly, joins The House to speak about the threat to his home country and the need for rich countries to participate.

6:46A matter of life and death