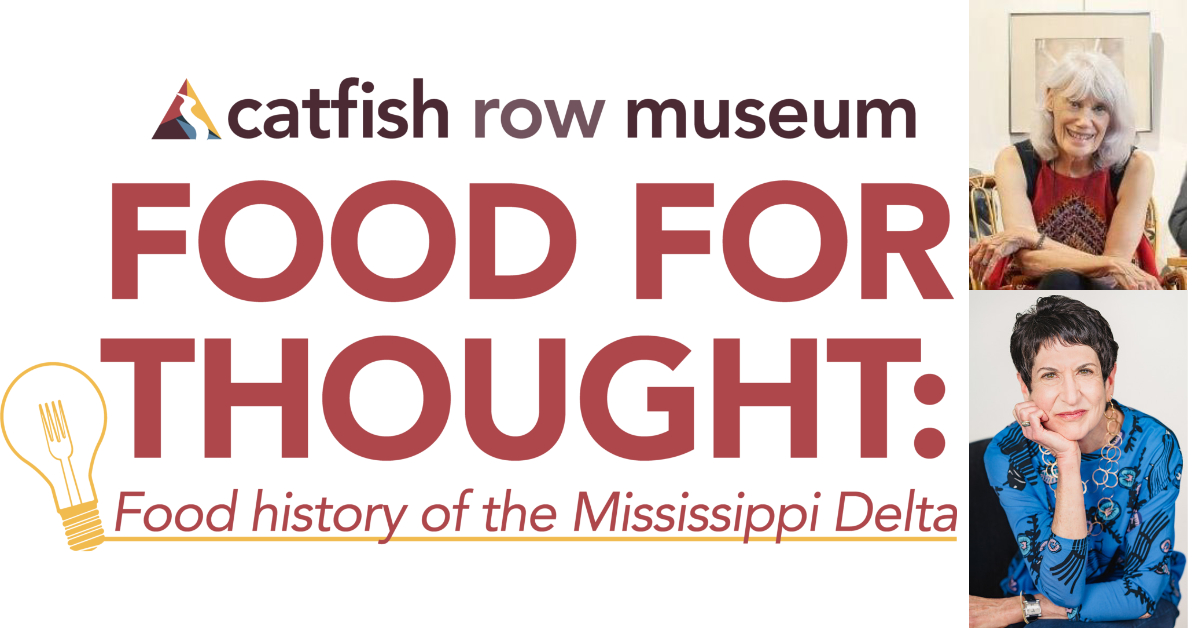 One of Marcie Cohen Ferris’s strongest memories of her Jewish youth in the Arkansas Delta town of Blytheville is the regular trips her mother made to Memphis to stock up on kosher food. She even devoted a chapter to it in her 2005 book, “Matzoh Ball Gumbo: Culinary Tales of the Jewish South.”

“I interviewed several Jewish women along the Mississippi River who talked about driving to Memphis to get Jewish vacation supplies,” Ferris said. “And always bring a cooler back to Rolling Fork or Vicksburg or Greenwood or Cleveland to bring back a taste of Jewishness to their friends, family and synagogue.”

Saturday at 2 p.m., Ferris and longtime friend Lesley Silver, owner of the Attic Gallery in Vicksburg, will host a conversation at the Catfish Row Museum about how Southern and Jewish food cultures intertwined in the Mississippi Delta and how food is an expressive language of region, religion, personalities and families.

Ferris moved to Vicksburg in the 1990s with her husband, William R. Ferris, a folklorist and scholar from Vicksburg and the South. She worked at the Museum of the Southern Jewish Experience in Jackson. She met Silver, who had grown up in a Jewish community in Birmingham, Alabama, shortly after arriving. Ferris’ parents were from the New York-Connecticut area, and his grandparents hailed from Ukraine and Belarus, while Silver has roots in Hungary – a country whose trademark spice was everywhere in the kitchen. of his grandmother.

“My mom used a lot of paprika,” Silver said. “She was boiling potatoes and putting in salt, pepper and paprika, or if it was roast, it was paprika. It was part of what we ate; it was just mixed with the other foods.

Ferris’ Ukrainian grandmother had Russian eating habits, but she also became a Southern cook. Because of this crossbreeding, she cooked fewer strictly kosher meals. She didn’t use pork or cook ham, but they could eat sliced ​​ham, she said. She made stuffed or rolled cabbage in the Eastern European tradition, with ground beef and a sweet tomato sauce and brown sugar. She made borscht and blinis.

“She made blinis, [these] little pancakes, they were tiny, and these were definitely Russian,” Ferris said. “But she made them with matzo flour, and matzo flour is just ground matzo that is ground into a very fine flour that you can cook with. At Passover time, when you’re not supposed to use flour that will rise, and you’re not supposed to use yeast or grain that will rise, we would have these little matzo flour pancakes.

Some regional specialties are so good that they cannot be ignored. For Ferris’s family — and throughout northeast Arkansas — barbecue is one of the most important food traditions.

“It was a world that we dipped our toes into, and we certainly didn’t keep it kosher,” Ferris said. “But there was a world that was deeply Jewish and deeply traditional in its dietary practices, and that was Friday nights when we celebrated Shabbat in the synagogue.”

Those Friday nights, she and her family could sit down over fried chicken, slow-cooked brisket or kugel noodle stew for Shabbat. A mix of regional ingredients and vegetables from the Arkansas delta where she grew up, combined with the influence of African-American cooks who worked for some Jewish families in the area, all helped shape Jewish eating habits. from South.

“My mom was from Connecticut, so she didn’t make a lot of classic Southern foods like greens, but I had them in school; I had some when we were eating at a Southern cafe,” Ferris said. “She cooked green beans and I’m sure she added a little pork for flavoring, and I’m sure she would have learned that from an African-American woman who worked for her.”

Ahead of her trip from North Carolina, where the Ferris currently reside, to Vicksburg and the Catfish Row Museum, Ferris intends to honor her Ukrainian heritage and express her solidarity with the nation as she fights back against an offensive attack from Russia. Amid the main course of maple tahini, meso, marinated salmon with asparagus and roasted potatoes, his Shabbat guests will find a tribute to his beleaguered ancestral compatriots.

“In honor of the Ukrainian people,” she said, “I’m going to bake a little poppy seed cake.”

Southern Jewish Food Cultures: A Conversation with Marcie Cohen Ferris and Lesley Silver is part of Food for Thought, a series of hands-on workshops, curatorial events, and programs centered on local eating habits. It is made possible by a grant from the Mississippi Delta National Heritage Area.

The programs are intended for engage with the public on issues related to race, place, ethnicity, history, music, food and the arts, all of which the museum aims to explore through its development and his next exhibitions.

All programs begin at 2 p.m. and will be held at the Catfish Row Museum, 913 Washington St., in downtown Vicksburg. For more Food for Thought programs, workshops and lab hours, visit catfishrowmuseum.org.

Saturday May 7: on the documentation of Delta Wok, a collaborative documentary project on the Chinese of the Mississippi Delta — Talbot Easton Selby, associate dean of the Thomas W. and Robin W. Edwards College of Humanities and Fine Arts at Coastal Carolina University and professor of photography ; Emily Jones, archivist at Delta State University; and Gabriella Blood

Jim Beaugez is a Mississippi writer whose work has been published by rolling stone, Smithsonian, American Oxford, Garden and Gun, guitar world and other publications. He also created and produced “My Life in Five Riffs”, a documentary series for Guitarist which traces contemporary musicians to their sources of inspiration.

This series of programming stories is produced by Front Porch Fodder for the Catfish Row Museum.

How much would the lavish Peaky Blinders mansions, homes and clubs cost you in today’s silver