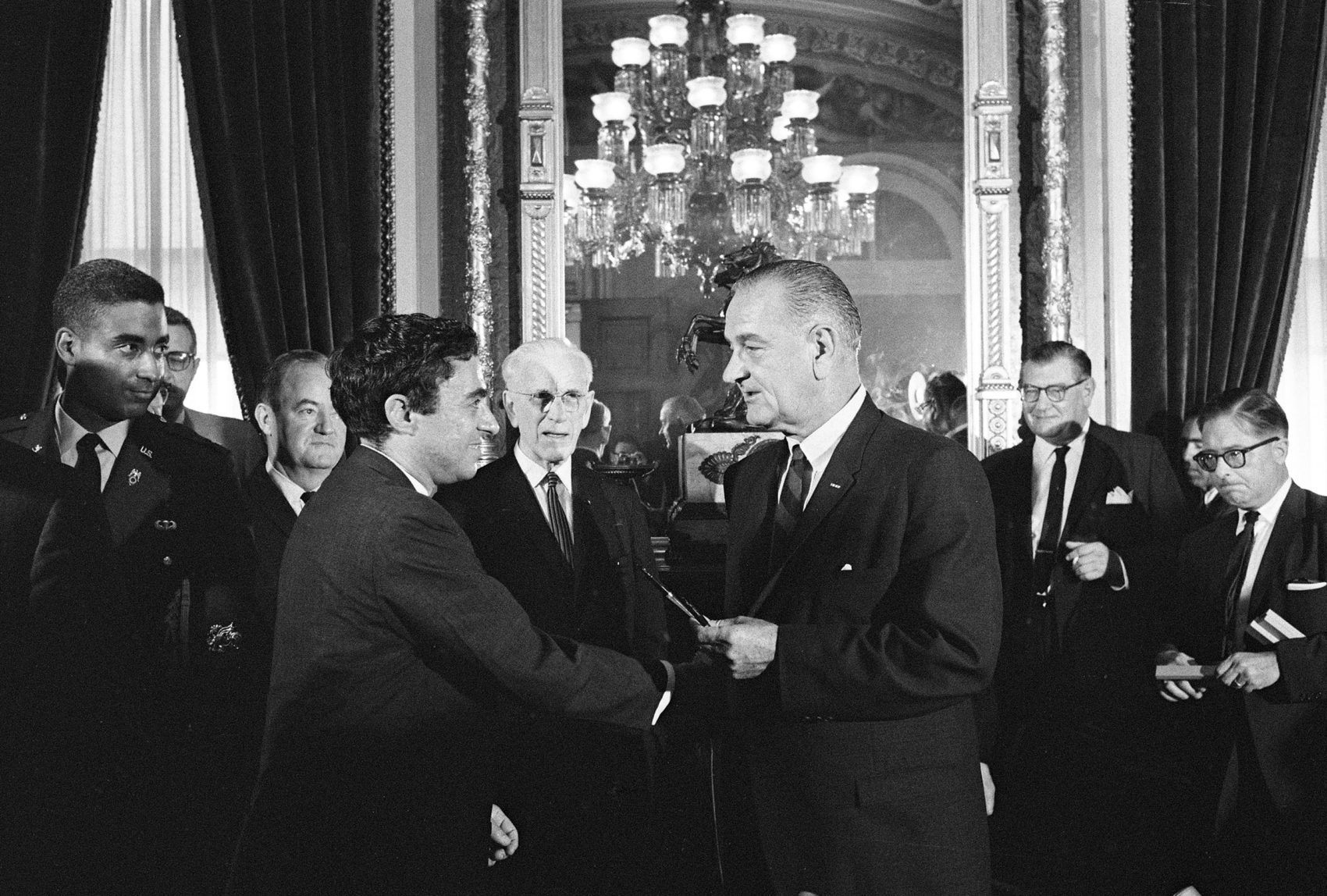 AUSTIN, Texas — The Dolph Briscoe Center for American History at the University of Texas at Austin has acquired the papers by Richard N. Goodwin, speechwriter and policymaker to Presidents John F. Kennedy and Lyndon B. Johnson, and Doris Kearns Goodwin, elected chairman historian and Pulitzer Prize-winning author. In addition, Ms. Goodwin will join the advisory board of the Briscoe Center.

Mr. Goodwin’s articles span more than six decades, from approximately 1950 to 2014, and offer an intimate insight into his distinguished professional career. Mr. Goodwin’s archive, an extraordinary time capsule from the 1960s, includes memos and notes on his contributions to national and international policy-making during the Kennedy and Johnson administrations, including the war on poverty and the civil rights movement. Among the treasures are drafts of many of the most historically important speeches of the 20th century, including JFK’s inaugural speech and LBJ’s “Great Society” and “We Shall Overcome” speeches. The draft of the historic LBJ speech at Howard University calling for affirmative action is accompanied by a telegram from Martin Luther King Jr. which reads: “Never before has a president articulated the depths and dimensions of issues of racial injustice with greater eloquence and depth.”

“I have loved the story all my life, so I am delighted that my papers and those of my late husband reside together as part of the exceptional collection at the Briscoe Center,” Ms Goodwin said. “I am impressed with the depth and breadth of the Briscoe Center’s holdings, as well as its innovative mission as a center that actively conducts its own research in its collections, while facilitating research for others. I hope our articles will offer unique insight and rich potential to students, historians and other scholars who will find the material not only informative but also inspiring.

The archives of Mrs Goodwin, author of seven critically acclaimed bestselling books and who New York magazine heralds as “America’s Chief Historian,” spans six decades, from the 1960s to the present day. The articles provide a roadmap of his writing process from his first foray into a subject, and include original research papers, interviews, early drafts, primary sources, and manuscripts.

“This acquisition is a milestone in the relatively short history of the Briscoe Center,” said Don Carleton, General Manager of the Briscoe Center. “These two archives cover a surprisingly wide range of significant events in American political, presidential and cultural history from the late 1950s to the very recent past. The fact that Doris agreed to be a member of our advisory board and serving as an advisor and ambassador to the Briscoe Center adds to my enthusiasm for these collections. I look forward to working with her to continue to build and promote the Briscoe as one of the premier history centers in this country.

Ms. Goodwin is best known as a preeminent public intellectual, presidential historian and biographer frequently seen on television putting today’s news in historical context. His books include the 1995 Pulitzer Prize winner No Ordinary Time: Franklin and Eleanor Roosevelt: The Home Front in World War II; Team of Rivals: The Political Genius of Abraham Lincolnwhich won the Lincoln Prize and was the basis for Steven Spielberg’s award-winning 2012 film, lincoln; and his most recent, Leadership: in turbulent times, which explores the early development, growth and exercise of leadership. Her articles chart the course of her growth as a historian and writer and include professional correspondence, documents, photographs, visual recordings, press clippings and other memorabilia.

As a member of the Briscoe Center Advisory Board, Ms. Goodwin will support the mission of the center and the university through appearances on the UT Austin campus, including lectures, seminars, and consultations with students. “I am thrilled to return to Texas, to visit these boxes which not only open a door to our country’s history, but hold memories of the long life I spent with my husband and our cherished careers, and to share these memories and my love of history with UT students and faculty.

The Briscoe Center features a sampling of Goodwin Papers materials on display in its New Acquisitions Gallery, located in the center’s Research and Collections division (Sid Richardson Hall, Unit 2) on the UT Austin campus.

About Richard N. Goodwin and the Goodwin Papers

About Doris Kearns Goodwin and the Goodwin Papers

Articles by Richard Goodwin and Doris Kearns Goodwin are currently closed for processing. The center will announce the opening of the collections to researchers.