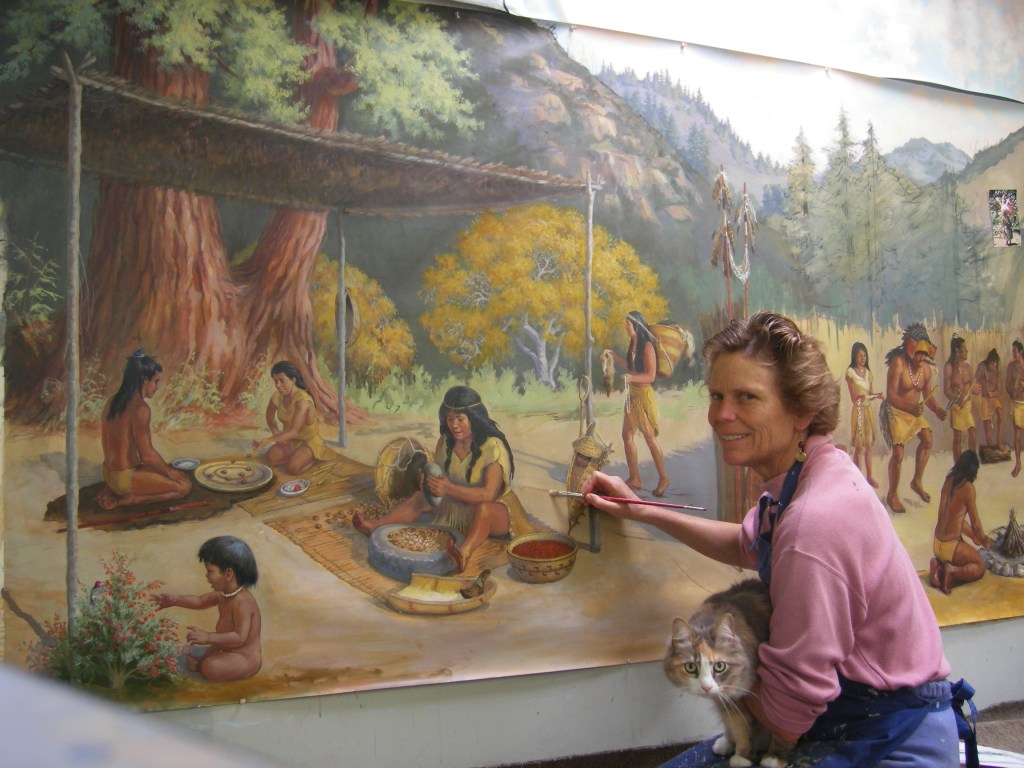 Artistic journey of the museum muralist

I was cycling through downtown Santa Cruz in 2011, passed the Pacific and Locust Sockshop and found Ann Thiermann painting a mural on the back wall, to celebrate the 100th anniversary of this emblematic building of the Banque Populaire. I recognized her style in the Pearl Alley mural from 1995. When she learned that I was a local historian, Thiermann said she was looking for pictures and information to bring the street scene to life. I came back several times with things she had asked for. When she wanted to add a car to the streetscape, someone passed by a vintage automobile. Thiermann asked the driver if it was correct for 1911, and the man said “I’ll be back tomorrow with my 1911 car!”

Thiermann titled his painting “People make our city”. The mural features the architect, Wm. Weeks painted in an upstairs window, Santa Cruz Beach Boardwalk founder Fred Swanton on a bench, reading in the Sentinel about his carousel installation in 1911, while that from the Sentinel building across the street emerges journalist Josephine Clifford McCrackin, the lawyer to save the Great Basin Sequoias.

Thiermann has produced more than 70 murals statewide, many for history and nature museums. For someone who spends their life focused on others, I have been so intrigued by surprising glimpses of Thiermann’s own story, that I have long wanted to tell his story. As Thiermann prepares for the Open Studios from October 2-3, the opportunity has arisen for the public to examine the art and life of Thiermann.

She was born into a Santa Monica Quaker family, with brothers Eric and David, and sisters Heather and Aggie. His mother was a gifted painter and sculptor. His father had the largest tree surgery business in Los Angeles, and his strong civil rights activism stemmed from the Quakers’ obligation to serve the community, which made them a highly motivated and militant family.

Thiermann’s life changed in 1960 when she was 10 years old and left the town of Santa Monica for the Topanga Canyon countryside. Suddenly the school was half an hour away by bus. Her father had an 8 acre ranch called “Friendly Acres”, but she discovered that her friends were now trees, rocks and streams, in a state of wilderness that the native Topangas would have known. She had a horse, a donkey and chickens. The family loved to camp, visit state and national parks each school break, and even let off steam on their own property (albeit sneaking into the house to use the restroom). When it was difficult to run away, the world came to them. Friends from Thiermann’s college liked to come because his father led them in the games.

Thiermann loved music and had been playing the piano since he was 6 years old. Then, in 1961, Father Ian offered the Thiermanns backyard for the Santa Monica Quaker sponsored “Topanga Banjo & Fiddle Contest”, attracting 30 participants and 500 fans. Folk music has long been a place of protest songs. Performers included Mike Seeger (brother of “If I Had A Hammer” composer Pete Seeger) and Afro-Caribbean singer Henry “Taj Mahal” Fredericks. This founding folk festival grew rapidly, settling the following year right next to “Camp Wildwood”.

In 1964, Betsy Itsbister of Santa Cruz was one of the leaders of the Thiermann Quaker Youth Labor Camp, helping to build homes in the slums of Kankakee, Illinois. Then President Lyndon Johnson signed the Civil Rights Act on June 2, the most radical civil rights legislation since Reconstruction. To celebrate, Ann’s group traveled to Chicago to walk with Dr. Martin Luther King Jr. and hear him speak at Solder Field. King called for redoubled efforts to end discrimination and poverty.

In high school, Thiermann discovered that she had inherited her mother’s natural talent for painting. Thiermann began by focusing on figurative images and made portraits of all the students in his world history class. She wanted to go to Mills College in Oakland, but the family couldn’t afford it. Then Thiermann was elected to represent the high school “Pali” (Palisades) in the fine arts. Out of 64 high schools, she won first place in fine arts and a scholarship from the Bank of America. So she spent a year at Mills College studying music and art.

Her brothers had gone to the new UC Santa Cruz, which Thiermann attended from 1969 to 1972. The campus is made up of forests and redwood fields, which inspired her to study art and music, as well as mythology. and folklore. Todd Newberry’s course in biological illustration got her interested in natural history. And she loved the independent art history studies of famous mystical artist Mary Holmes.

Thiermann returned to Topanga and spent a year painting and studying with Renaissance painter Sid Francis. With the help of the locals, Thiermann organized an art exhibition, which earned him $ 1,000, enough to spend three months in New York. She stayed in a Quaker boarding house and taught at a Quaker school. At Carnegie Hall, Thiermann was a musical accompanist for ballet lessons, opera singers and instrumentalists, then crossed the street to the famous Art Students League to study classical figurative portraiture and drawing. Lisa M. Specht was the league’s first female president, but the importance of this century-old institute had diminished as modern art became minimal, conceptual and impersonal.

Murals were pretty much the only figurative art to thrive in the 1960s-1970s, as they dressed blank walls in something human and personal, generally reflecting a neighborhood’s cultural identity. Thiermann was hired at a Jewish center for the elderly in the Bronx, as a music director and muralist. One of the residents was a former silent film pianist, now blind, but could still accompany popular songs. In 1976, the seniors performed in front of the New York Public Library, singing songs from “Oklahoma” in a Yiddish accent.

Thiermann’s three months in New York had turned into three years, until she saw California nature scenes at the Met and felt homesick for the West Coast. Thiermann returned to Santa Monica and taught art and music at a private high school. She studied organ at UCLA, while painting at Cal State Long Beach Senior School. His MA thesis consisted of a series of 25 paintings titled “Reflections,” showing people in reflective moods in mirrors.

For several years she taught at the LA County Museum of Art, studying Old Masters, figurative drawings, and landscapes. In 1987, after her graduate studies, she had an exhibition at the Rose Cafe in Venice, California, entitled “Locker Room Landscapes”. They were very popular with Hollywood movie stars, and Arnold Schwarzenegger asked him to do his portrait.

Meanwhile, brother Eric Thiermann had returned to Santa Cruz in 1976, founded Impact Productions, and began making documentary films. Father Ian reunited Eric with Helen Caldicott, who founded Physicians for Social Responsibility in 1978 in the hope of ending the nuclear arms race. Eric made the documentary “The Last Epidemic” in 1979, edited with his father, and released in 1980-81. Life Magazine and Newsweek called it the most influential anti-nuclear weapons documentary of its time. Eric went on to win an Oscar for a 1986 documentary.

Thiermann lived near the Santa Monica freeway, until her doctor told her she looked like a light smoker, even though she had never smoked in her life. With his father and brothers already in Santa Cruz, the move north was natural. She taught at San Francisco City College, only to experience the earthquake of October 17, 1989, which razed highways, toppled buildings and caused fires. She left San Francisco to get away from the “seismic zone”, surprised at first that the damage spread to Santa Cruz, until she discovered that the epicenter was in the forest of Nisene Marks ( near his current home / workshop). As an organist for the Soquel Congregational Church, she was performing at a church wedding two weeks later, and just as the pastor was saying “Faith, Hope and Love, and the greatest of between them is LOVE ”, then a strong reply, as if to underline the power of Love.

Charles Prentiss asked Thiermann to make Jurassic landscapes for the Santa Cruz Natural History Museum. The museum had partnered with the Boardwalk for an animatronic exhibit of 15 “Dinosaurs at the Beach” from October 16, 1993 to January. 23, 1994, in the Penny Arcade. The exhibition was boosted by the release of the film “Jurassic Park” four months earlier.

In 1997, the Natural History Museum asked Thiermann to create a mural in the village of Ohlone. Thiermann researched the subject and staged a village from Ohlone to Nisene Marks as a model. The mural was so well received that a request came from Santa Paula in 2001 to paint a scene from the village of Chumash on the Blanchard Public Library. Thiermann loves trees, and has framed the scene with sycamore trees. To her surprise, she found songbirds hovering against the mural, trying to land on the branches. Museum curator Frank Perry said: “This is the ultimate compliment! “

In 2008, when the UCSC American Indian Resource Center commissioned a scene of native dancers in Quiroste, Val Lopez and his group from the tribal group Ama Mutsun served as consultants and performed dances as role models. In 2013, she did “Burial Rites of the Bay Area Indians” at the Oakland Museum. Because accurate depictions of native California life are so rare, Thiermann’s images have been reproduced in museum exhibits, books, brochures, and documentaries. Equally informative are his natural history murals, showing the relationships of native species to the environment.

Thiermann’s seeks to bring harmony and understanding in a world of discord. Her mediums of art and music, she says, overlap with a similar language of color, rhythm, light and shadow. Thiermann has performed with the UCSC University Choir, the Distinguished Artist Series at Peace United Church, has served as organist in several county churches, and teaches art at Cabrillo College.

Thiermann’s studio (catalog n ° 59) will be open from 11 a.m. to 5 p.m. on October 2, 3, 16 and 17. It sits above the village of Aptos, on the cathedral off Trout Gulch, look for the signs. Visit santacruzopenstudios.com for more information. Some of his framed plein air landscapes are studies focused for parts of wall paintings. Copies of his exhibition catalog “Pathways Through Our Parks” are also available. Sign up for his “Bell’Italia” sketching trip to Italy for June 2022, visit annthiermann.com.