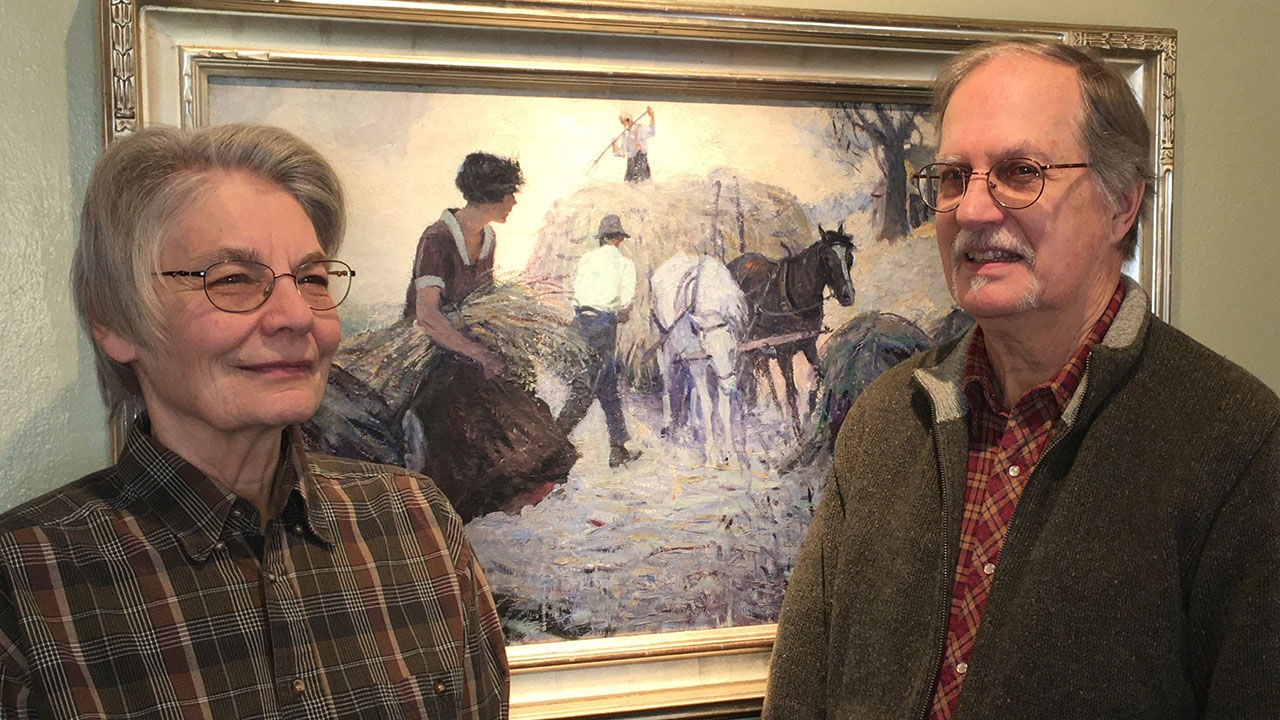 Nebraskans Mark and Carol Moseman have assembled over 200 works of art representing an eclectic array of styles and renowned artists from America and Europe, with a common thread that unites them: the relationship of humanity to Earth.

Considered henceforth as a collection of great artistic and historical value, the works belong to the genre of agrarian art. The term was coined by Mark Moseman, a highly respected agrarian artist himself, and is now recognized by the Smithsonian Institution.

Over the years, the Mosemans have donated art from their collection to various museums and now donate the rest to the Great Plains Art Museum, located at the Center for Great Plains Studies at the University of Nebraska-Lincoln.

“Agrarian Spirit in the Homestead Area: Artwork from the Moseman Collection of Agrarian Art” will be on display at the museum from July 2 to October 23, with a reception opening from 5 to 7 p.m. 2nd of July. The reception is free and open to all. the public.

â€œWe are incredibly grateful for the Mosemans’ continued support and generosity, and we are honored that they have entrusted this collection to the museum and to the University of Nebraska,â€ said Ashley Wilkinson, director and curator of the museum. â€œThese works of art allow us to offer a new level of education and experiences to visitors, students and researchers, a level that fosters important conversations around the diverse and complicated history of land use in the Great Plains. We look forward to sharing this collection with the public for years to come.

Mark Moseman organized the exhibition of 61 works. It includes paintings, sculptures and engravings revealing a radical shift in culture on the Great Plains, from European American colonization and colonization in the 1860s to an exodus from the land from the 1930s.

The exhibition presents works by artists such as Jean-FranÃ§ois Millet, Eastman Johnson, Winslow Homer, Georges LaugÃ©e, ThÃ©rÃ¨se-Marthe-FranÃ§oise DuprÃ©, John Gutzon Borglum, Harvey Dunn, Diego Rivera and Robert Gwathmey. The works of John Steuart Curry and Georges Schreiber show the uncertainty towards the end of the Homestead era and the twilight of this brief but transformative period in American history.

â€œThe Moseman Collection and the financial support that the Mosemans have committed are an invaluable contribution to our mission to foster the study and appreciation of the people, cultures and natural environment of the Great Plains,â€ said Margaret Jacobs , director of the Center for Great Plains Studies. â€œTheir gift also elevates the overall stature and excellence of the university. We are very grateful for their generosity.

The Mosemans also created a fund through the University of Nebraska Foundation for the Great Plains Art Museum. The endowment will ensure the preservation of their collection and help make it accessible to the public.

The Mosemans grew up in a small town in Nebraska – Mark outside of Oakland and Carol in Brainard – and are the descendants of immigrant settlers and settlers who came to Nebraska in the 1800s. Mark Moseman said his first memory of life on the farm was to put hay with his father and grandfather. He recalls a vibrant family and social life on the farm and in the surrounding community – the farms were small and the families helped each other.

Husker alumni Mark and Carol Moseman said as they got older they saw centuries-old farm life start to change. Practical work shifted to mechanized agriculture, which required fewer people. As technology progressed, farms grew larger and small towns that depended on their business emptied out.

â€œIt was a gradual, slow death,â€ Mark Moseman said of the exodus from family farming. â€œThe loss of these people and this culture is something that needs to be noted. It shouldn’t just be something dying on the vine.

The Mosemans decided to do their part to document this story through the art they collected – not just the exodus from the farm, but how the relationship with the land changed and what was lost in it. transformation, including his role and responsibility as the janitor.

â€œThis art has more than just a wellness goal,â€ said Mark Moseman. â€œHe has a purpose where, hopefully, he can impact the people who see him. We will feel that we have accomplished something in life that no one else could really do without a vision that we had.

Carol Moseman said, â€œThere are some paintings that I will miss dearly, but I know they will be safe.

The Moseman Collection exhibit arrives at the Great Plains Art Museum from the Albrecht-Kemper Museum of Art in St. Joseph, Missouri. An exhibition catalog written and edited by Mark Moseman accompanies the exhibition. It includes guest essays by Reed Anderson, associate professor of art history at the Kansas City Art Institute, and Brandon Ruud, curator of American art for the Abert family at the Milwaukee Art Museum.