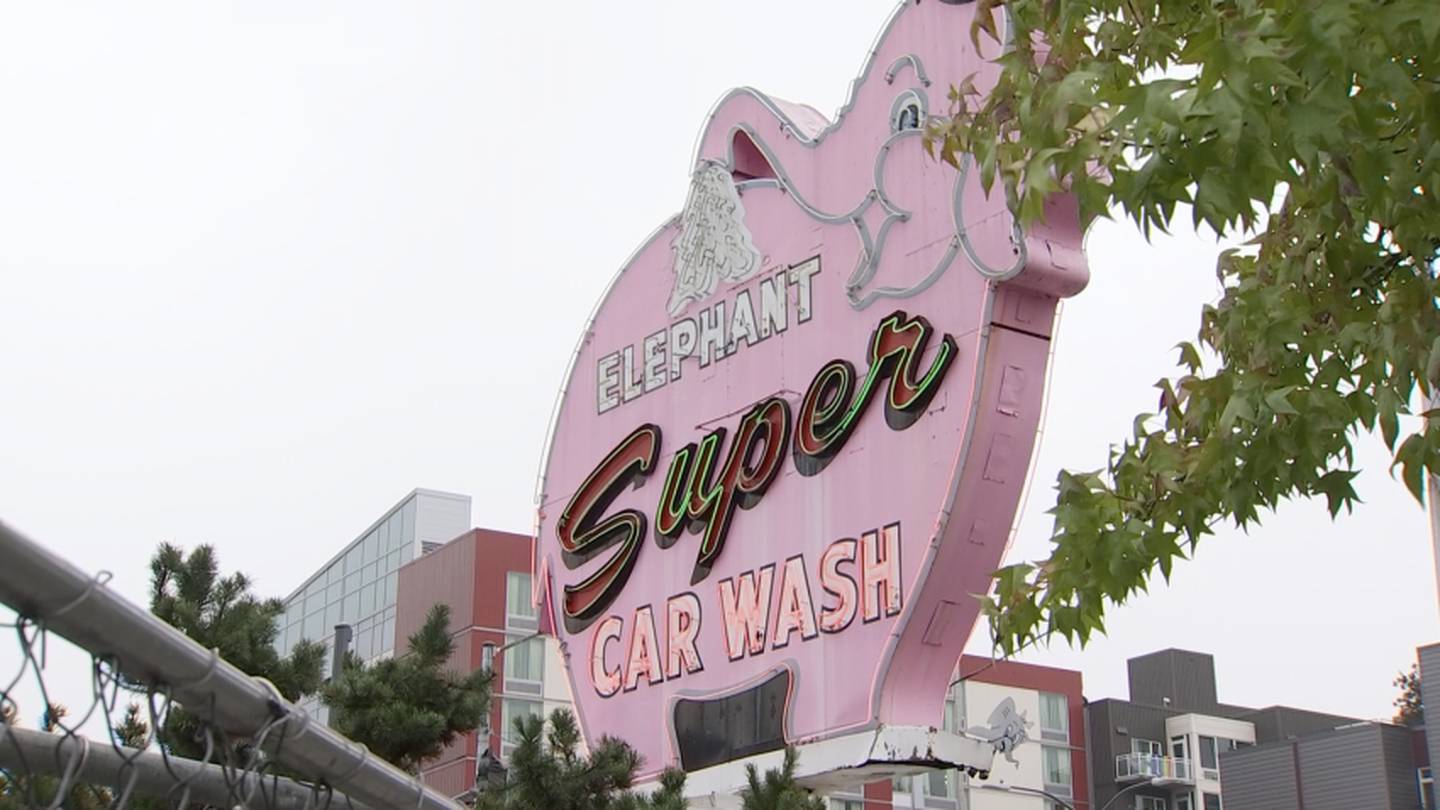 The pink Elephant Car Wash sign was named a landmark of the City of Seattle, in a unanimous vote by the Landmarks Preservation Board.

Originally at 616 Battery St., the iconic sign was donated to the Seattle Museum of History and Industry, to join their neon collection with the Rainier Brewery ‘R’ and Blue Flame sign natural gas from Washington.

According to History Link, in 1951 Eldon Anderson and his wife Virginia opened a “Five Minute Car Wash” on South 4th Avenue and Lander Street.

Eldon moved around the state to help with projects, such as building the Deception Pass Bridge, settling during World War II where he found work in the Boeing metal stamping shop.

Eldon and his brother, Dean, invented the first touchless automated car wash that included a pulley system, soap and water nozzles, and an overhead sprinkler.

In 1956 a third brother, Archie, joined the business. A second car wash, known as Super Car Wash, opened at 6th Avenue and Denny Way. Interstate 5 had yet to be built, and the heavily trafficked location just off Interstate 99 was close to downtown businesses and shopping.

Archie came up with the idea for an elephant because the animal basically had its own garden hose, thinking it would be a good name and logo.

Campbell Neon, the sign company they hired to build the sign, suggested it be pink. In the 1950s, pink elephants were a common theme among entertainment and festivities, and could be found on ceramic trays, salt and pepper shakers, tie clips and more.

The sign was designed by Beatrice Haverfield, who was responsible for the design of other iconic Seattle signs including Ivar’s Acres of Clams, Sunny Jim Peanut Butter, and Dick’s Drive-In.

In 1963, the Andersons opened a third car wash on Pacific Avenue South in Tacoma. Business was booming and the Andersons were always on the lookout for opportunities to promote their business, including figuring out how to position a real elephant on pontoons for a photo shoot to make it look like it was water skiing. .

The Andersons would sell most of their stuff to Bob Haney, retiring and traveling the world. They sold their last car wash, the one in Tacoma, in 1997.

Haney announced the closure of Denny’s site in 2020 due to criminal and drug-related activity, rising costs and “regulatory requirements”. As of 2020, the land originally leased to the Anderson brothers in 1951 was now valued at $20 million.